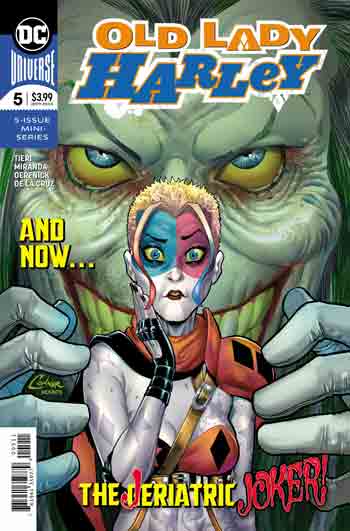 Old Lady Harley #5 concludes this mini-series from the sick mind of Frank Tieri.

Seriously, what kind of twisted mind takes our beloved Harley Quinn, ages her and sets her out on an adventure to find her presumed dead Mr. J?

How many Deadpool and Mad Max references in one book? I mean, really, how is it that Catwoman is riding a Lark scooter and Lobo is the King of future Las Vegas?

Is this detention-worn copy of Mad Magazine or a DC Comics mini series?

My final question remains—why is this over so soon?

I certainly do hope another volume gets produced. I have no idea if Margot Robbie fans or Harley cosplayers are the ones snatching this book up, as when I read it I feel like it’s a custom book for me and my other ‘Old Man Comic Fans’!

We’re still here with 30+ years of Wednesday Warrioring under our belt and not much to show for it except that in rare occasions you can get a self-referential comic book story that has us laughing as if we were giggling along with Cracked in Saturday detention.

Those formative years were, after all, where we became the broken fanboys and girls that take to Twitter in order to chase that dragon every day.

The Joker has taken over the airwaves and revealed himself to be alive and holding Harley captive. Harley is actually able to fend for herself against Joker’s Droogs but the rest of her Scooby Gang: Catwoman, Red Tool and Killer Croc arrive at Joker’s hideout in a stolen Atlantean ship.

It has been a long journey to get us here. Who is Joker, now that it is revealed that Original Recipe Clown Prince had his head unceremoniously removed from his body?

This issue has a fair amount of flashbacks to the buildup of the rise of Joker and Harley growing into the bad ass Old Lady Harley we have become so fond of, and the last pages draw the series to a conclusion that leaves the story open to a second volume.

No spoilers here, but brava, Mr. Frank. You’ve certainly made a more fun and wacky version of the Old Man/Lady trope and universe from “Across the Street”. Is this a better book than the last few Old Men coming from Marvel? Apples and Oranges, baby! Don’t dare compare! They tell me in group therapy, “Identify, don’t compare.”

If Red Tool were to conclude this review he might just come right out and say it, “Yeah, ours is better and we thought of it first”!