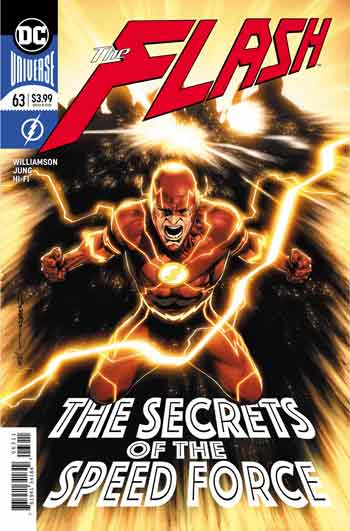 This is the ending of the Force Quest storyline. It’s not a moment too soon for me. This story has been a bit long in the tooth and I couldn’t wait to it to be over.

So how does this final issue of the storyline fare overall?

Well, it’s definitely the best part. They started things right off for me here with an awesome Howard Chaykin alternative cover. That put me in an instant good mood and it continued a bit from there. The issue starts off with the tag team of Gemini handing the Flash a traditional beatdown.

Can The Flash escape this duo?

Or will they use the Strength Force to end his career as well as his life?

Well I can tell you this. The Flash breaks free of his predicament. He then has to fight the Gemini Twins in an all out battle! The three of them knock each other around for a little while. It’s actually becomes a lot of fun to read.

Then, The Flash has a trick up his sleeve! He figures out a way to turn the Gemini twins against each other. And from that, he finishes them both off!

But there is a cool twist that follows!

The Flash somehow let loose an even deadlier force called the Forever Force! It’s a pretty intense scene that follows and it has some amazing visuals Mink Yu Jung.  The colors here are especially very nicely handled in this sequence as well.

I was pretty enthralled by the end of it all. It turned my mood completely around! The last scene in particular ended the issue wonderfully. It’s a high note for sure. I’ll just say this. Barry comes across Wally and it’s a hell of an image to leave on. I wanted to know what was going to happen next immediately.

This was a nice turn of events for this title. I’m enjoying where this is headed and the story possibilities ahead. Hopefully Williamson can keep this train going. This was pretty good.