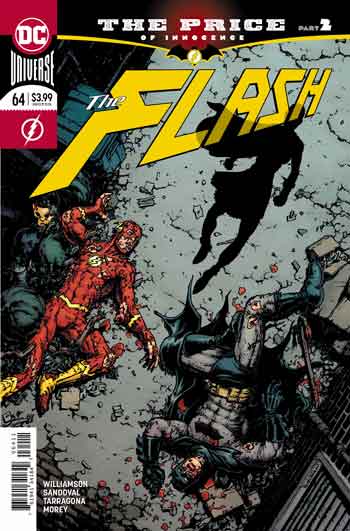 This issue is a continuation of the storyline that was started in Batman #64.

And that issue had a doozy of a revelation about Gotham Girl and what she’s been doing. These could have been throwaway fill-in issues but Joshua Williamson has turned that issue and this latest Flash issue into must reads. This issue picks up right where we left off!

We see Gotham Girl holding her brother Gotham and bragging about how she took down the Flash!

We see that she had to do it to help him out Gotham. And then, a figure appears in the background.

The story sure seems to be headed that way.

Or is it someone who is far more sinister than we have ever thought possible?

Batman and the Flash meanwhile head to the Mediterranean to investigate Gotham Girl and where she might be. What they find instead is a psychological nightmare.

Clare (Gotham Girl) has been put through absolute hell it seems in her past. Sanctuary is mentioned as well and there may indeed be a link to it. There are what seem to be experiments just like her all around the place that they find. And then, Gotham Girl shows up, ready to finish the job she started.

A big fight scene happens! It’s explosive and well drawn by Sandoval. Things become even more deadly when Gotham Girl lets a few of the experiments loose. They may all be using the Venom Bane uses to muscle up! It gets really dark.

And then, Gotham Girl flies away, and leaves the rest of them fighting.

Williamson keeps the plot moving and the story incredibly focused. He’s treating this crossover with the utmost respect. It’s awesome to see. He works so well with Sandoval too that the whole thing is just seamless. The issue does move a little quick in story and pace but it may just be that I wanted more.

It’s great stuff. I have no idea what’s going to happen next in this crossover. I can’t wait though and I’m glad it’s only a week between issues. The next chapter can’t come fast enough!