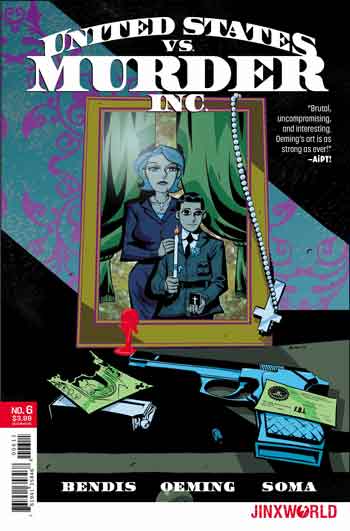 This was quite a unique book from the dynamic duo of Brian Michael Bendis and Michael Avon Oeming.

The book moved quickly and was quite fun. This is the last issue of this limited series. And the book ends on a high note. The creative team knew what they wanted to accomplish and they do it right here.

The issue begins with hitman Valentine sitting with his mother. His mother had been violently attacked by the government.

You see, Valentine was there when the President was shot.

Although he wasn’t the one to do it, he was part of the conspiracy to take her out. And now his mother has paid the price.

The dialogue is emotional and the scene is masterfully scripted by Bendis. It’s a nice beginning to this last issue as well.

From there we get a rather comical scene of the Vice President of the United States quitting. He knows he’s over his head and it’s time to call it quits. It’s a funny scene and the facial expressions in tandem with the dialogue are hysterical in a macabre way. Bendis and Oeming really show what they are capable of here.

From there, we see almost a montage of of the various revolutions around the globe. The world is in utter turmoil! Things are getting crazy! There’s even a scene of Congress going bananas. All of this is handled with glee from the creative team. They set everything up perfectly and that leads into a really cool ending.

And what an ending! Instead of the explosive ending you might be expecting, Bendis and Oeming go for a quieter one. It hits you straight in the chest too. Valentine’s mother recounts a story about her and her husband that plays perfectly into the ending. I don’t want to say too much, but it’s definitely awesome.

There is one last dark twist too. It’s excellent. This whole book was completely fantastic . Bendis and Oeming really pull it off. There is a setup for another series at the end. I’m completely in. This was so good that I am counting the days until the next one starts up.