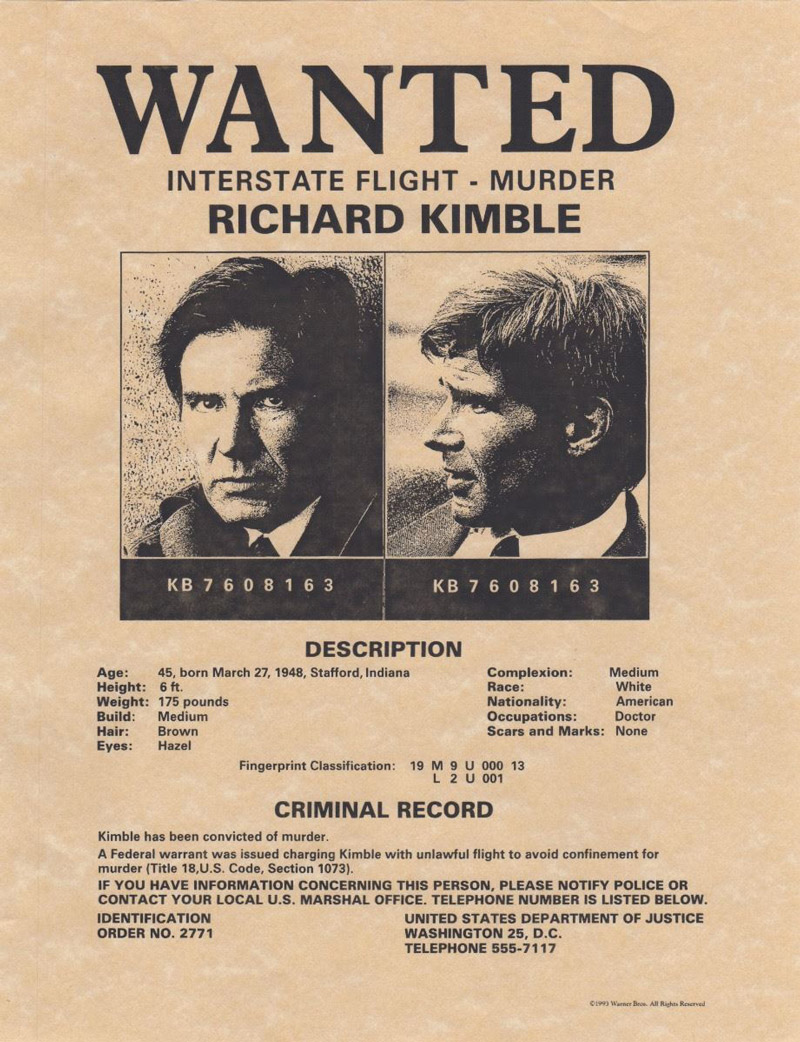 I recently re-watched the Andrew Davis thriller The Fugitive starring Harrison Ford. I have to say it holds up. To say this film had the right stuff is an understatement. It’s an action thriller with great acting, something Hollywood didn’t seem to truly reproduce until the Liam Neeson’s Taken franchise. The writing, pacing, and most of all suspense-laden action, is a marvel. To top it all off Davis used 27 cameras to show an actual train slamming into an actual bus, in a ONE SINGLE TAKE. In your face CGI!

For those of you unfamiliar with this 1993 action film, based on a long-running tv series,  it surrounds a doctor named Richard Kimble played by Ford who is wrongly convicted of the murder of his wife, a murder he claims was committed by a one armed man. After becoming an unwitting participant in a prison escape, Kimble spends the entire movie trying to prove his innocence while simultaneously being pursued by a crack team of Federal Marshals. The Marshal team, led by Samuel Gerard, played masterfully by Tommy Lee Jones who would go on to win the Best Supporting Actor Oscar for his work, are relentless. They drive the action in pursuing a desperate man who always seems one step ahead.

One thing struck me in watching it again; how the hell did Richard Kimble stay at large for as long as he did without getting caught? The answer is simple; white privilege.

For those of you who think this is a cynical take on a movie adaptation of a TV classic allow me to offer this analysis.

During the film Kimble, while on the run, impersonates a doctor twice. Well, once as a doctor, and once as a janitor who forges a doctor’s orders, both times with heroic results. Obviously with Kimble actually being a doctor this isn’t a stretch, however he manages to do this in two separate hospitals crawling with police actively looking for him. It’s so hard to believe he goes undetected one of the Federal Marshals actually mentions it out loud. It is mentioned again later when Kimble visits a detention center trying to track down the one armed man. It was as if the movie felt it necessary to apologize during the movie. 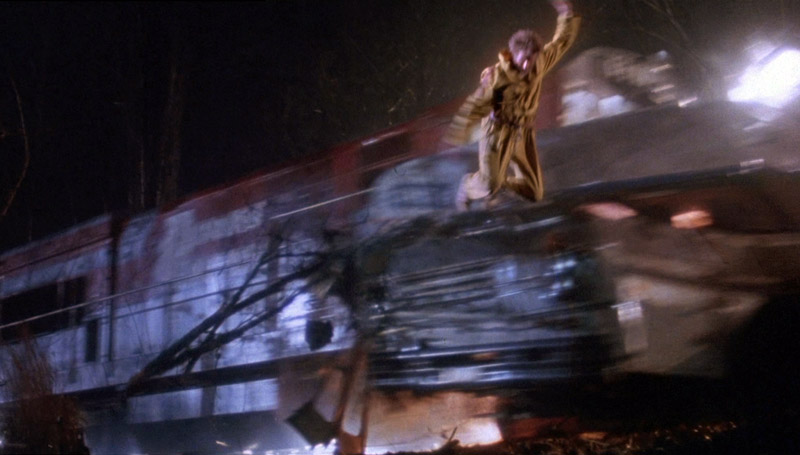 It’s fair to say most people would point out far more unbelievable moments in the film such as, Kimble’s narrow escape from the train colliding with the bus, while outrunning its subsequent derailment; and his dive off a running damn narrowly avoiding certain death; or later surviving exposure to the elements long enough to find dry clothes. But it’s a movie, and movies require a reasonable suspension of disbelief.

As hard to believe those scenes seem in retrospect, they made perfect sense in the moment, as Kimble was continually being left with impossible choices. And isn’t the point of any good story to put yourself in the protagonists shoes and go along for the ride? I lived and died with every breath Ford took in Kimble’s shoes and loved every second, but I couldn’t help but think if it were me, and not Ford, I’d get caught asking to use the bathroom at the truck stop. But that’s subjective. So let’s examine a much more objective scenario from the movie itself.

When Kimble escapes he’s not alone. A fellow inmate named Copeland, played by the wonderful African American actor, and Andrew Davis stalwart, Eddie “Bo” Smith Jr., escape at the same time. Copeland helps Kimble out of his leg irons and says “I don’t give a damn which way you go, just don’t follow me.” Copeland runs off and gets away clean.

Well, we never really see how he gets away, but we presume he didn’t jump off any raging damns. Despite Copeland’s advantage it’s not long before Gerard and crew catch up to him. 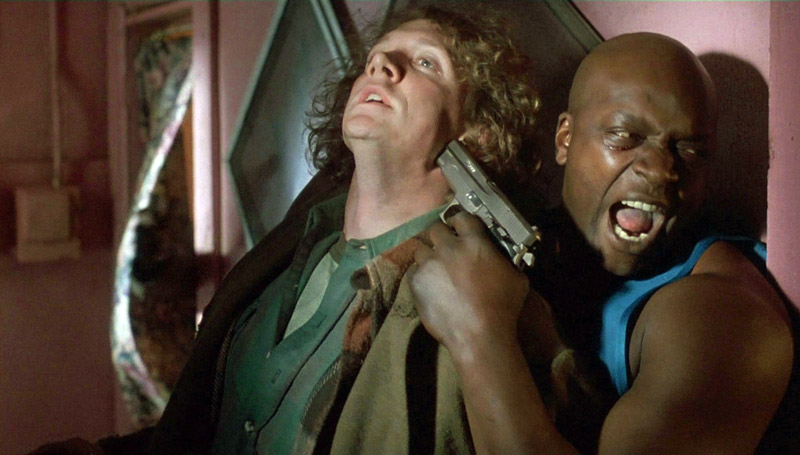 They catch and kill Copeland in a scene designed to fool the viewer into thinking the team may have Kimble instead. Davis does a good job in establishing Copeland as a bad person. The prison bus escape was brutal and he violently attempts to hold a Marshall hostage in a desperate and ultimately worthless bid to stay on the run. Copeland is fatally shot by Gerard who plainly states what we’ve just witnessed, “I. Don’t. Bargain.”

Most people would argue Copeland was sloppy.

He went back to his wife/girlfriend, which is the first place a cop would look. But Copeland didn’t come off foolish. Perhaps the woman he was shacked up with was someone he just met? If that were true why would they have found him? It’s never truly established, it’s all sort of left up to the viewer. The credit is listed as “Copeland’s Girlfriend” so the viewer would only know that after the film is over. Since he was such a bad person you don’t feel sorry for his death, all sorrow goes to Kimble who’s truly innocent.

However it gnawed at me. Copeland was laying low, not pretending to be an Hispanic janitor in a hospital he used to work at with a stolen ID card.

Kimble’s white privilege goes nearly unchecked throughout the entire film except by Dr. Anne Eastman, played by the only person in the movie whiter than Ford, Julianne Moore. 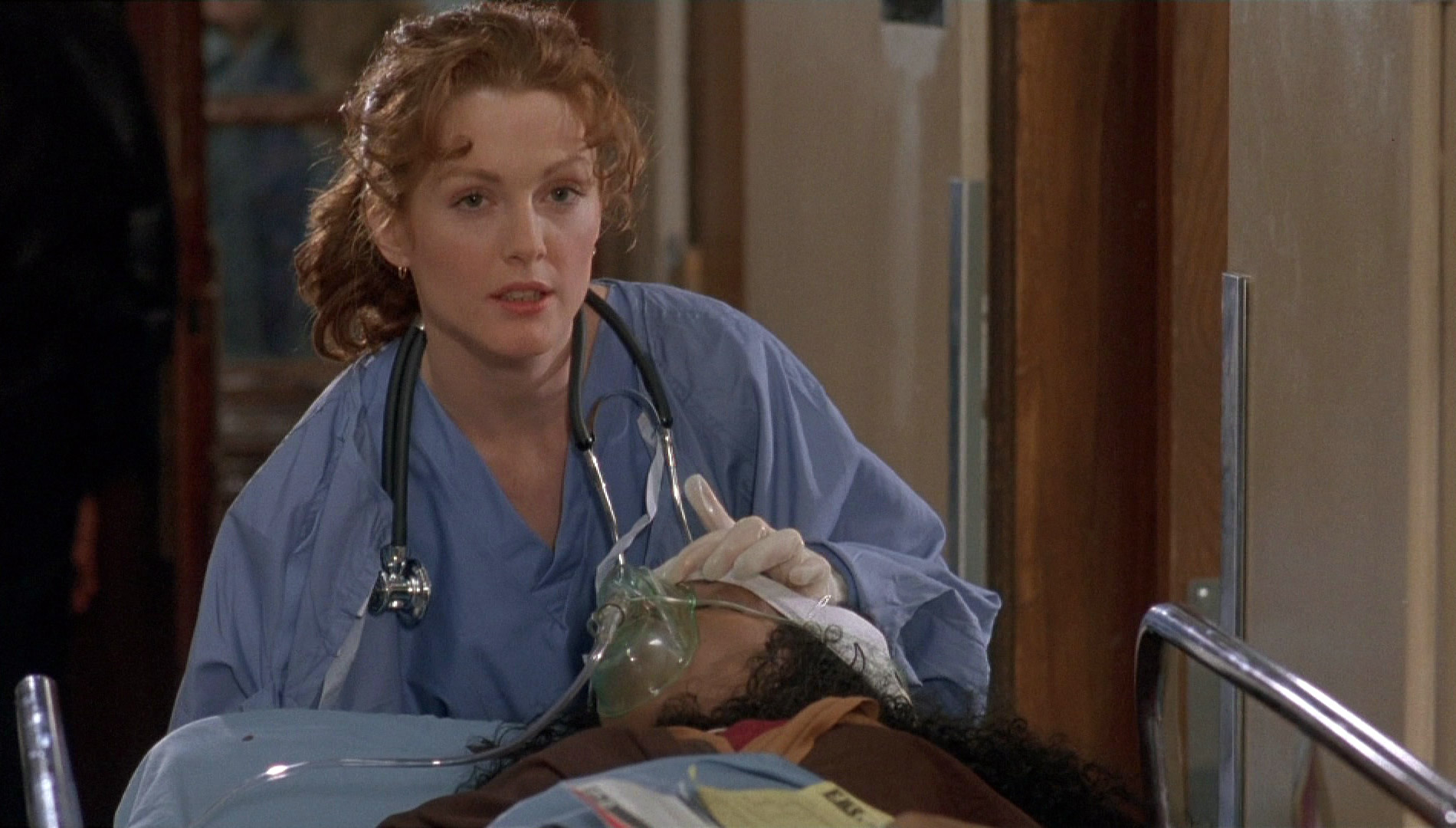 This was an early performance in Moore’s career and it’s obvious immediately how she became a star. Ford’s Kimble gives her a BS excuse about how looking at X-Rays is a hobby when she confronts him about changing a young patient’s orders. Moore’s eyes narrow, and for the first time in the movie doesn’t buy it. It’s fair to point out, Ford is sporting his Hispanic janitor gear at this point but he can’t hide how white he is, despite his ridiculous attempt at a stereotypical accent right out of the late comedian Bill Dana’s racist and wildly popular Jose Jimenez character, plus an ID that reads (wait for it) Desmondo. Ford does drop the accent for Moore only because it seems like she just isn’t having it.

Kimble’s white privilege doesn’t stop there. He’s able to rent an apartment, buy clothing, walk past police, enter a court building, break into a man’s apartment, escape undetected despite police sitting across the street, credibly alert security to Gerard’s hot pursuit with the hilarious excuse “There’s a man waving a gun, and screaming, at a woman.” and best of all, fade away into a sea of fellow white people in the Saint Patrick’s Day Parade in Chicago. Interesting side note, Davis filmed this during the actual parade, and like the real train, lends to the authenticity of the entire film.

The film does employ a single recognition of Kimble on the El, which is odd because most people riding public transportation make an effort not to stare or make eye contact. In a nod to a film noir staple, an El rider reads the paper with Kimble’s wanted picture on the front page. Upon flipping it over he notices Kimble is sitting directly opposite him. This leads to a confrontation with the one armed man and begins the climax of the film. It’s corny, but it works.

It’s fair to say Kimble is smart, careful and deliberate. Kimble was a top surgeon in his field, and is the first one to figure out the conspiracy of why his wife was murdered. But it’s also fair to say Kimble got away with a lot due to how he looked, or more to the point, for how he didn’t look. Copeland stayed inside out of sight, masterminded a prison break, and never jumped off a damn, but was caught right away.

Kimble fumbled his way through freedom, impersonated doctors, janitors, visited old friends (who selflessly committed felonies to help him), taunted Gerard by calling him from the phone inside the one armed man’s apartment, and marched in a parade; but was still able to stay free long enough to solve his own wife’s murder. He did this even with an army of cops and the very best Federal Marshall team in the country looking for him. 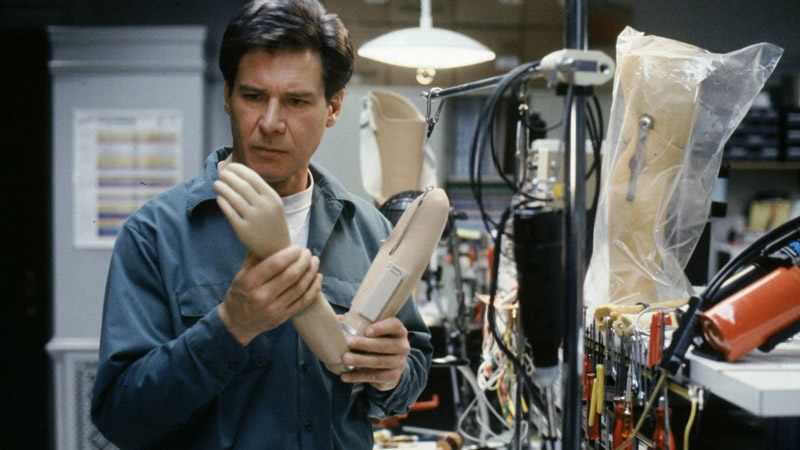 It should also be pointed out although the audience knew Kimble was telling the truth about his wife’s murder, no one else did. The case against Kimble, played out in the opening credits and seemed more than airtight. In just those few scenes we are left with a notion there’s no possible way he’s getting out of this murder charge. But just like Shawshank Redemption a year later (which also has a healthy does of white privilege especially when it came to Tim Robbin’s Andy hiding in plain sight attitude after his escape) we know deep down, these guys, are gonna be just fine. When Kimble steps on that prison bus in the beginning, he’s dressed in a jumpsuit just like everybody else, wearing leg irons and cuffs, just like everybody else but he isn’t like everybody else, and I’m not talking about his innocence.

It needs to be said, Andrew Davis’ The Fugitive is not a racist film by any stretch. Both the good guys and bad guys have diverse casting in the film, including Gerard’s crack team of U.S. Marshals. Even the casting of the one armed man, played by the late great Andreas Katsulas, is diverse.

The Fugitive would go on to spawn a serviceable sequel, U.S. Marshals, with Jones and crew reprising their roles five years later. In a complete contrast to the Kimble white privilege issue, the fugitive in this film is played by Wesley Snipes who would have no such privilege. Snipes’ evasion is explained away by his character’s military expertise instead. 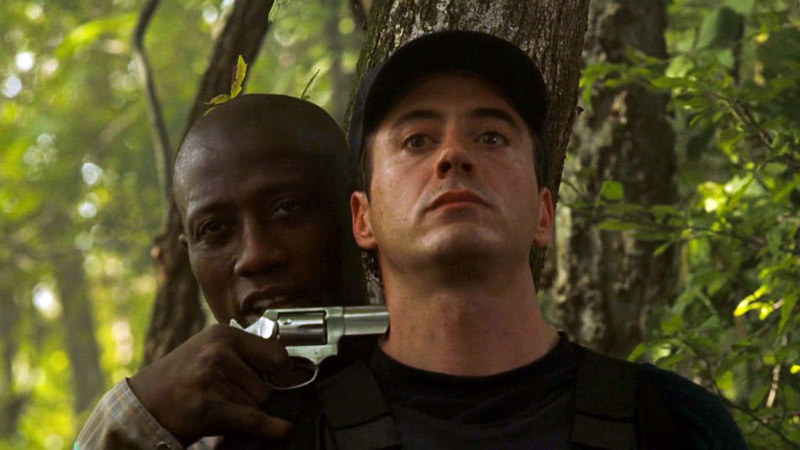 In addition to Moore, The Fugitive has an early role for Jane Lynch, and a cameo for Lester Holt playing a reporter, and white privilege or not, I still highly recommend it.

Fred Shahadi is the author of Shoot the Moon living in Los Angeles, CA.