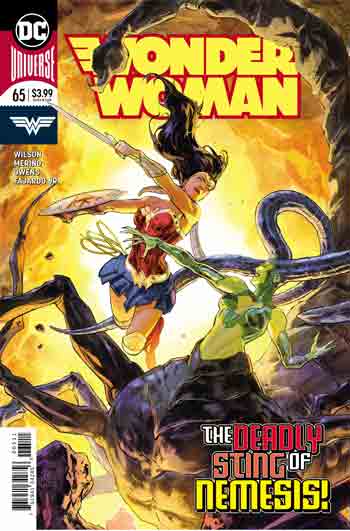 The couch-surfing Aphrodite trades in her unicorn t-shirt fit a superhero two-piece when Diana reveals that Themyscira and Olympus have disappeared and out heroes are stuck here on Earth trying to solve the mystery.

When Diana tracks down her longtime rival Nemesis she discovers that Nemesis was in fact the one controlling Cale and not the other way around.

How does Ares fit into the equation?

He may have caused this mayhem when he escaped from his prison cell but only time will tell.

Uncharacteristically, Wonder Woman collapses Nemesis under a ton of rock and seeks out Veronica to save her from her own bad intentions and to stop Cale’s lawsuit against Princess Diana, her legal blockade version of a Superhero Registration Act.

Both Veronica and Diana now share something in common, a vampiric bite from Nemesis that courses a venom of revenge in their veins. A truce is called, for now, as Diana adds protecting and finding Cale’s daughter to her ever expanding to-do list.

Enlisting the help of the goddess of love and an invisible transport of Aphrodite’s creation, the two immortal being set out for answers. With Nemesis under rock and Cale staying her court orders, the team-up of the Olympian and the daughter of Hippolyta head skyward.

Not much to say critically about this issue other than the synopsis above except that all of Wilson’s stories to this point are leading up to this issue. This is a middle chapter in a longer story as the worlds of mortals and Gods collide. Partly this reminds me of when Asgard was on Earth a few years ago at Marvel, and we will see where these mystical places have been displaced to. Earth? Another dimension? Space? Time will tell.

Jesus Merino does a lot with emotion and expression in this issue as well as great action and beautiful human forms. This is a top notch creative team giving us the goods!

The female relationships are the backbone of making this book believable and strong. Steve Trevor is not only a supporting character in the truest sense of the word, but also he exists to support and love Diana while the goddesses are out saving the day.

It’s not an exact gender flip-flop of traditional roles in comics but is just enough of a paradigm shift to push him out of the spotlight and let the title character do the heavy lifting.