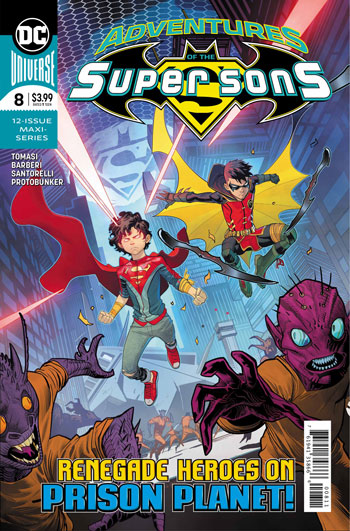 This fun book continues to move along at a nice pace. Peter J. Tomasi writes a very enjoyable story and he takes the reader places that they would never expect.

This issue may be my favorite one in the run so far. It’s almost a shame that it’s just a twelve issue series.

We are on the prison planet of Takron-Galtos for this issue! The first couple of pages show the guards of the planet in a control room. They see a security breach on the screen! Then we see a wounded Rex Luthor mad that he lost the solar device. He has a temper tantrum and you can’t help but giggle a little. He’s mad at Joker Jr. for defying him and he intends to do some bad things!

Luthor then declares war and forms an army to hunt down Superboy, Robin and Joker Jr, who are now teamed up to get off this crazy planet. They try to strategize but Damian Wayne decides that they need to regroup and head back to the Batcave that is on that planet.

Yes, you heard that correctly.

Damian has decided to make one on the planet. And the visit to it is pretty hysterical. Damian actually found the time to make this place. Superboy and Joker Jr look around the headquarters and together they try to formulate a solid plan.

Robin does some surveillance. While he’s away, Superboy and Joker Jr. have a discussion. It’s one of the best moments that Tomasi has ever written. In it, Joker Jr. tells Superboy that he believes in him. I was moved by that particular bit of dialogue and for the scene as a whole.

By the end of the issue, Superboy and Robin do manage to get off the planet. But there is another threat that comes their way. And it’s a small cliffhanger for sure but a very interesting one. I love the last page of artwork too.

That’s because Barberi is the perfect artist for this book. He gives the book it’s own energy yet it’s never cartoony. It just moved quickly too. When you combine that with the well thought out scripts by Tomasi, you’ve got a great book.

This has been a bunch of fun indeed.