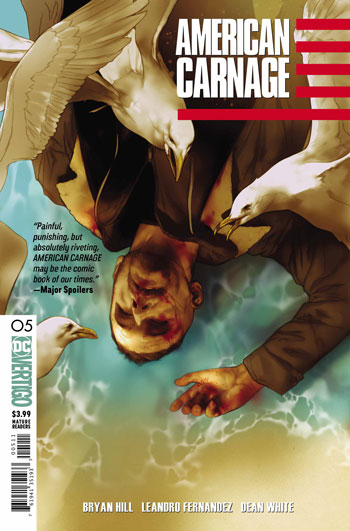 This comic book is blowing my mind month after month! I can’t believe how good it is! Bryan Hill just swings for the fences in writing this book and I’m thrilled with each individual chapter thus far of the series.

This is one of the most compelling comics out right now and I’m floored by some of the events that happen in it!

The beginning of this issue has Richard Wright on a beach being tortured by Winn Morgan. It’s a fairly brutal sequence. Morgan and Wright have a deep and intimate talk. Wright really spins his tale well to Morgan, but does Morgan buy it?

I have to say, the art and the writing worked seamlessly throughout the scene.

I felt every line that Hill wrote like a punch to the gut. It was honest and came from a real place. Conversely, the art is emotional and you can feel what the characters are feeling throughout. Some scenes are downright painful to look at. Fernandez nails the art in a way that will make it stick in your mind for years to come.

Richard then meets up with Morgan’s daughter Jennifer.  She sees that her father has been torturing him. She tells him to run for it and to get away from this place. This scene shows that Richard is caught in this web. It shows that he will never escape this world of violence and pain.

Jennifer and Richard part ways and it’s equally as painful to watch as the previous scene. This issue is very important to the series as Richard is starting to narrow down who killed Agent Watson. It starts becoming truly intense too as the scope of Wynn Morgan’s political plans start to come to light.

This is one hell of a book. I can’t believe how good it is and how every page gives me anxiety. But it’s a good anxiety as the two creators here are at the top of their game. This book is tops.