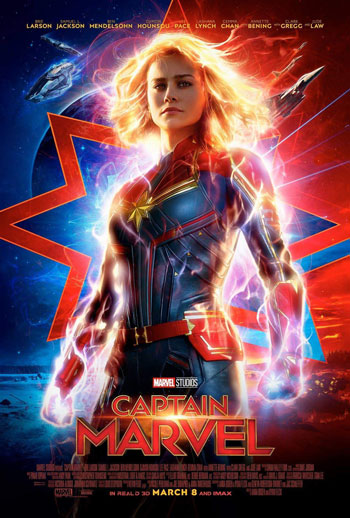 We are nearing the end of Phase 3 of the Marvel Cinematic Universe and just like any puzzle, the many disparate shapes are starting to form a picture and story that goes beyond their single piece.

But just like those rainy day timewasters, some are more important and interesting than others.

Captain Marvel had all the potential to be a corner piece, framing and holding together the story while standing out as a strong individual film from over 20 movies in the series thus far.

But a lackluster time-jumping storyline and technically bland fight scenes make a soft introduction for one of the most powerful heroes of the MCU.

Captain Marvel focuses on the story of Carol Danvers (Brie Larson) as she finds herself transformed into one of the galaxy’s mightiest heroes after Planet C-53 (that’s Earth to the rest of us) after being caught in the middle of an intergalactic conflict between two alien worlds. She receives an assist after landing from Agent Nick Fury (Samuel L. Jackson), who is dedicated to understanding the next threat to civilization, wherever it may come from.

Brie Larson is an amazing actress who can imbue a raised eyebrow with enough disdain to give an alien invader second thoughts, but many times her too-cool-for-school attitude comes off as indifferent when some sort of emotional buy-in is needed. To have Jackson providing more of the upbeat attitude is certainly a role reversal. Captain Marvel is as equally Nick Fury origin story as Carol Danvers, with new information about his background before S.H.I.E.L.D. and how he came to wear his iconic eyepatch.

The sarcastic duo of Danvers and Fury is buddy comedy gold, but for a 90s throwback it feels oddly reminiscent of a 70s midday cop show at many points. There are foot chases and car pursuits that are good enough for most other action films but are low stakes for a Marvel movie. Captain Marvel is far more storytelling than action flick, but since it was not sold that way there is a justified confusion about the slow pace. The expectations that many audiences have been primed for as far as high action mutant blockbusters are not met, and that disappointment can take away from an interesting (though tangled) backstory.

With that serious piece said, much of the humor comes from leaning on era-appropriate “fish out of water” jokes.

Watching technologically advanced species have to deal with early home PC load screens drew big laughs from the audience, and what better disguise to match Danvers disaffected screentime than a baggy Nine Inch Nails t-shirt and jeans? There are also plenty of Easter eggs throughout for MCU fans, and small-screen aficionados may have a leg up as the Kree vs Skrull storyline was recently introduced in Marvel’s The Runaways on Hulu.

Notably, an area where this film excels is the use of de-ageing technology, which allows Samuel L. Jackson and Clark Gregg (as Agent Coulson) to play their younger selves. The ask of finding an actor that could accurately channel a fresh-faced Nick Fury in the early days of S.H.I.E.L.D. would have been quite a lift. The results are impeccable, even in high action sequences, and the success will surely launch many debates as to whether or not actors will need to be retired or simply re-digitized to stay with franchises.

Captain Marvel will leave many moviegoers wanting, not because of a bad movie but because of an unfulfilled mission of showing us what an unleashed Carol Danvers is truly capable of. The glimpses we see in the final battle are more a taster for Avengers: Endgame than a well-wrapped story, and would be too-little too-late for anything that was not a connective piece in a soon-to-close arc.

I’m already looking forward to seeing what Captain Marvel does later this spring because unfortunately, I did not get to see as much as I wanted to of what she could do here.