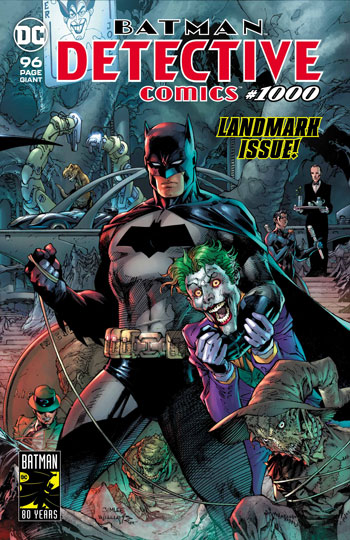 Written and Illustrated by Various
Published by DC Comics

Man, what an honor it is to review this book. I was genuinely excited that this was coming out. When I picked it up, I wasn’t in the least bit disappointed. It’s absolutely fantastic. DC did a great job with last year’s Action Comics #1000.

Here, they actually might have topped themselves. It’s unbelievable!

The Batman’s “Longest Case” starts off the issue. This one is by the fan favorite creative team of Scott Snyder and Greg Capullo. It has to do with a case from long ago involving forgery and a business magnate who is killed by his son. We first see Batman scaling a wall and we find out all the particulars about the case.

Then he encounters a bunch of other detectives from the DC Universe.

This story is used as a framing device for the other stories in the book. Snyder and Capullo do a great job of it too. The story is fun and well drawn and makes for a great entryway for the other creators in this issue.

It got the issue off on the right foot and after that I just dug in. (Kudos to Capullo for his interpretations of some of the great DC detectives).

The next story is the collaboration between Kevin Smith and Jim Lee. It has to do Matches Malone going into a place called the “Gotham Gift Shop.” This is a place apparently where a bunch of things that have been lost in Batman’s fights are for sale. And it’s pretty insane.

The owner has guns that have jammed on the Riddler for sale. He’s got one of the Mad Hatter’s hats as well.

It’s a nice story with some great creativity in it. Matches is looking for a particular item. And it’s an item that is linked to Batman’s past.

The art is okay on this story. I’m not the biggest Jim Lee fan but he does a capable job here of Illustrating Smith’s story. It’s a fairly simplistic ending but I liked it enough for my tastes.

Next up, we have a story by Paul Dini and Dustin Nguyen. I love this creative team as they are simply awesome. They tell us the story of Knute Brody. Brody was a henchman for some of the greats. But he’s also the world’s worst henchman.

It’s a simple tale that is very funny. We get to see Knute foil some big plans for some of the greats including Poison Ivy and the Riddler. I laughed out loud a few times during the story. The ending is quite funny too.

Dini and Nguyen work perfectly together as always here.

We get a story by Warren Ellis and Becky Cloonan that was very simple and very awesome. In it, we get to see Batman tracking criminals to a warehouse. It leads to a battle and it’s quite explosive. And then, at the end Batman gives one of them criminals a choice to either give up crime or face big consequences. It’s a strangely powerful tale the team gives us here.

That’s because Cloonan is a fantastic artist who makes the whole thing feel like a big theatrical performance. It’s all so streamlined that you can’t help but love it. This is Batman boiled down to his core and I just loved it.

Up next is a story by Denny O’Neil and Steve Epting. This one has to do with Leslie Thompkins having to stop Bruce from doing something terrible. The story starts and we see a robbery. Then, we see Batman meeting up with Leslie. They talk. And just like that, the criminals and Batman cross paths.

Batman takes them out, of course. The scene is pretty brutal. Is Batman about to lose control? Leslie feels she has to stop him. This leads to a harsh and sad ending. The story is good(though I wonder if Leslie just gave the criminals Batman’s identity at the end?) and Epting is a fantastic artist who does great work here as well.

Then, of course, we get the obligatory Neal Adams Batman story. But it’s written by Christopher Priest so it got me a little excited. We get to see an incident from Bruce’s past and how it relates to a current situation.

And then I lost track of what was happening. Priest seems to have written a good script that Adams just ignored.

There seems to be a body found in Gotham. Bruce does some digging into who it is and how it got there. It all leads to a confrontation with Ra’s Al Ghul who swears he has nothing to do with the case but gives Batman a clue. This leads into the ending and I have no idea what happened. But oh well!

The next tale is by Brian Michael Bendis and Alex Maleev. It is called “I Know” and it starts off in the future. The Penguin is walking on a waterfront type of area and he encounters another man in a wheelchair. He then tells this man that years ago he figured out that Batman was actually Bruce Wayne. And from there it flashes back.

We get to see how the Penguin came to find out.  It’s no secret that the man in the wheelchair is Bruce Wayne. And it leads to an obvious ending. The flashback is well done and the art by Maleev however are more than worth the price of admission. It stands as some of his best work and that is really saying something. The colors especially are spectacular in this one.

From there, we get a very cool tale by Geoff Johns and Kelley Jones. It opens in a very interesting way. The Bat-Signal pops on and Damian talks about how it hasn’t popped on in a month. We then get to see a very different dynamic for the Bat-Family. Apparently, Gotham has been crime free for a month and the family jumps at the chance to solve a crime!

Things get downright bizarre. Apparently, Batman and Catwoman are together here and they have kids and even a dog. And they all fight crime. The ending does make sense of it all and it ends up being a charming tale. Kudos go to Kelley Jones on this one for his Illustrations. They are  really awesome and they give us a nice helping of emotion at the end.

James Tynion IV and Alvaro Martinez-Bueno have the next story and it’s my least favorite of the issue. It’s about the precedent that Bruce sets up for his partners. It’s a short story thankfully and moves quickly as there wasn’t much to it.

That’s not to say it’s awful (it’s not). It just a standard story. Not amazing, but not terrible either. The art is pretty spiffy but I was ready to move on by the end of it. So, moving on.

The next story by Tom King and Joelle Jones and Tony Daniel is awesome. I was confused a bit what was happening at first. Apparently, all of Batman’s sidekicks and partners are there and they are all gathering for something. It seems to be something big too.

The revelation had me reeling. Apparently, he got them all together for a family photo. He even says “Say Cheese!” It was fantastic. The art by Jones and Daniel is great here too and really gives this inventive story an incredible weight while maintaining the fun.

Lastly, we get a story by Peter J. Tomasi and Doug Mahnke. The whole thing is a bunch of flashes of Batman’s battles over the years. It shows the history. It shows what has happened before. It shows us then what is coming.

And what is coming is the Arkham Knight. And what an introduction too! This was a nice jolt of electricity at the end of the issue and I jumped for joy! I can’t wait to see what happens next!

This is an anniversary issue that earns its place in history. DC really did an incredible job here and it shows on every page. This is one to savor.