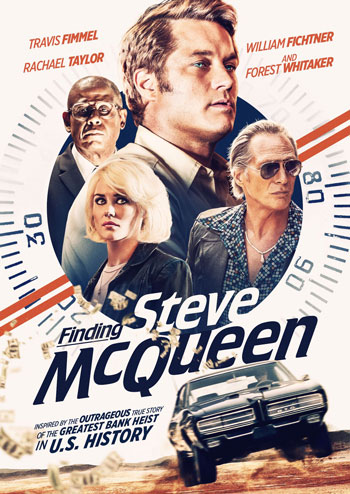 A low-level criminal crew out of Youngstown, Ohio finds out about a secret bank account of President Nixon’s and decide to rob it in this genial heist film.

It’s based on the true story of the biggest bank heist in history, which took place in March of 1972 in Laguna Niguel, California. Somehow, Midwestern criminals heard about Nixon’s illegal stash of “milk money” long before the Feds did, although this well-publicized robbery certainly added to the soon-to-be-ex-president’s headaches.

The bank robbers here aren’t nearly as charming as Robert Redford in last year’s The Old Man & the Gun (also based on a true story). But we do root for them to stick it to Nixon as much as we root for Lambert, the Fed on their trail (Forest Whitaker), to break the case.

Travis Fimmel stars as Harry Barber, a fairly simple guy who’s obsessed with Steve McQueen. He dresses like the movie icon, tries to drive like him (in a series of stolen cars) and even dyes and curls his hair to look like him. Without that ample Viking beard, it’s hard to recognize him as the same guy who plays the fierce Ragnar Lothbrok.

He gets in on the heist since it’s his Uncle Enzo (an enjoyably Walken-esque William Fichtner)’s idea. And it’s not just a big score to Enzo: He delivers an impassioned rant about his hatred for Nixon, “who’s a bigger crook than any of us” to his reluctant compatriot Pauly (Sopranos alum Louis Lombardi, adding some goombah humor to the mix).

Soon the five-man team is in sunny California, where they stick out like sore thumbs in this surf town. So much for maintaining a low profile. While Harry is more than a bit thick, he does come up with some of the most ingenious aspects of the heist, including a clever distraction when the police nearly catch them in the act.

In the investigation, Agent Lambert is aided by Sharon Price (Lily Rabe), a newer agent who’s also been relegated to the sidelines like he’s been most of his career. I enjoyed watching them put the pieces together in what ends up being the biggest case of their lives.

The film cuts between the rather bumbling heist, the investigation, and Harry’s life on the lam.

A big chunk of the film, arguably bigger than fans of heist movies might be up for, is devoted to Harry’s smalltown romance with newly widowed Molly (Rachael Taylor), who has no idea about his felonious past. They both happen to be big movie buffs and Harry (who now goes by “John”) even lives above a movie theater, so there’s homage galore to Bullitt and Bonnie and Clyde.

He confesses his crimes to her in a coffee shop that might be the same one used in The Old Man & The Gun, which, unfortunately, just reminds you how much better the chemistry was between Redford and Sissy Spacek.

Like its soundtrack of familiar ’60s and ’70s tunes, it’s not covering any new ground, but it’s fun to hear a lesser-known hit from the past, Eddie Rabbit’s “Drivin’ My Life Away” open up the movie. (The movie spans 1972 to 1980, just squeezing in this tune from the singer of “Every Which Way But Loose.”)

But if you’re in the mood for an amiable retro caper flick, this should fit the bill nicely.