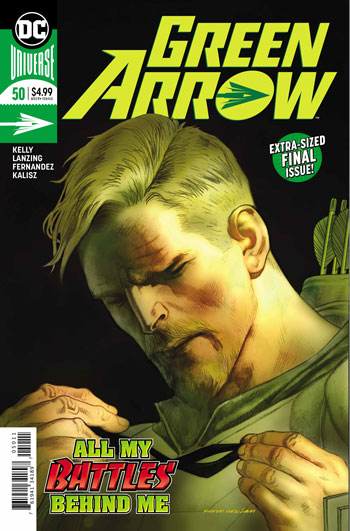 Today marks the final issue of the Rebirth Green Arrow at issue #50. The run has been a spectacular follow up to the New 52 volume and we are hoping to see more from this latest creative team of writers Lanzing and Kelly on writing duties.

Black Canary and Arrow are seemingly equal partners in the book, restoring the status quo in Seattle that is also a throwback to legendary Mike Grell miniseries, The Longbow Hunters.

Rebirth Arrow character Riot is also brought in to the fold as issue 50 puts a cap on the series. Let’s not forget either that Count Vertigo has been messing with the Emerald Archer’s world lately and the events of Heroes in Crisis have taken a toll on Oliver and his team.

Jayce, aka Riot rides the line between being ally and foe.  They are a different kind of sidekick, or that rails against Arrow’s motivations as a rich white dude but will ultimately side with him when the chips are down.

As this issue seeks to put a bow on nearly two and a half years of Green Arrow, it also attempts to wrap up plot lines from No Justice, a Justice League event arc. The writers craft a self-reflective adventure for Oliver Queen as his main squeeze turns on him. Canary is hunting down an artifact from the Justice League, a secret box that Arrow is hiding. Dinah is the only agent close enough to turn on him, so she is tasked with this mission.

Final conflicts force Oliver to take stock of his recent near fatal encounter with Count Vertigo and also asks the question, literally and figuratively, if Martian Manhunter was messing with Green Arrow when he gave him the box. What’s in the box? What does it all mean? Who knows? Except for maybe those of us that didn’t fall asleep reading No Justice.

In all, Oliver has been sent trough the ringer once again, and faces a choice of continuing as the Green Arrow or not at the end of the issue. I liked how Lanzing and Kelly voiced Oliver and of the art is spectacular in this oversized issue from Javier Fernandez. Lots of jumping, shooting, explosions, an Arrowplane and more excitement from the team here in this last issue.

What’s next for Green Arrow?

I guess we’ll need to look for him on the pages of Justice League because this solo series has been cancelled. Hard to tell why DC does such things. Sure it has to be sales related, but there are lots of other books on the shelves these days that aren’t not backed by a successful TV show. Will we see another volume when a big name writer bails from Marvel? Only time will tell!