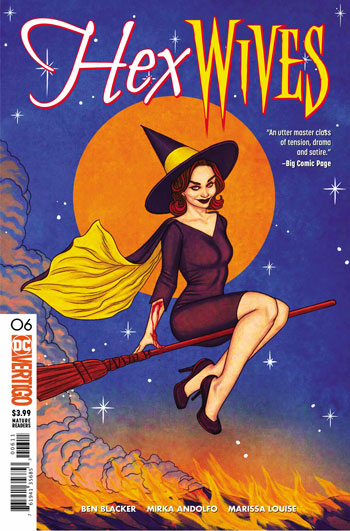 This has been a pretty wild series thus far. The build up and the revelations have been well done throughout the series. It’s been smart and even a bit funny.

This issue however, is the one where all hell just breaks loose. It’s a nice change of pace, and some of it is even freaky as hell!

The opening of the issue has the wives now in full grasp of their witch powers and curses.

It’s freaky because you get to see their “mother” talk to them and there’s all sorts of weird imagery and art. Andolfo really excels at making Blacker’s script come to life.

From there, we get to see their husband’s plans start to come apart.

The Architects (as they are called) are falling apart.

And while they are, the witches of Desert Canyon all have their powers at a peak. You know what that means!

The most powerful scene in the book is when Izzy encounters her husband. He basically admits that he was just using her. It leads to an emotional moment that is at the heart of the series. It’s extremely well done, I have to say.

The coven of witches really come together by the end of the book in a surprising way. The last image of the witches is especially haunting and sums up everything that this book is about. And it’s very well done indeed.

Ben Blacker is quite the writing talent. He has created some real characters here that truly resonate. He has found the perfect partner in his scripts with Andolfo who Illustrates them perfectly. They have both done a great job on this one.