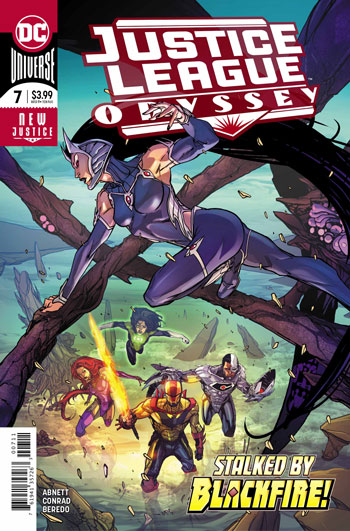 “You want a god to kill? A real one? A god of lies who threatens us all? I can give you one…”

Dan Abnett and the team producing Justice League Odyssey, turn in another fine effort this month, with the assist of new artist Will Conrad and colorist Rain Beredo.

It’s a good combination that makes for a nice-looking comic, and an enjoyable read, for all that it offers little more than to move the plot forward in largely unsurprising ways.

Conrad is a fine artist, with layouts and lines that are reminiscent of Mike Deodato Jr. And Beredo’s colors show a rare sensibility for striking a sharp contrast between bright and muted shades, one that really makes his chromatics pop.

Between the two, it completes an almost total artistic tonal shift for the book, that’s been underway for some time.

One I’m not sure will stick with the fabulous Carmine Di Giamenico and Ivan Plascencia still on staff doing this month’s cover. But for now, and for the most part, it works quite well.

The only criticism that jumps out for me – and it’s more a quibble than anything – is straight out of the gates, when Koriand’r, trapped with her friends at the center of a deadly attack led by her own subjects and directed by her sister, apparently loses it, and is consumed by a rage and power we are given to believe has been within her since that weird Starfire priest laid hands upon her, and downloaded his religious shamanic language into her psyche.

It’s a rage and power she unleashes in a display of force that apparently leaves her comrades in a state of slack-jawed shock, and scrambling to try and contain her.

Unfortunately, there’s not much in the art to suggest to any long-time reader that Kory is putting off that much more energy than she always has. A little bit. One two-page spread of large special effect lettering and a little lightning miasma. A little more light coming out from her eyes – and a brighter shade of color at that.

But either Mr. Conrad lacks a true grounding in old-school Titans history, or he and Dan Abnett failed to have a sufficient meeting of minds, or his layouts simply don’t allow for the scope of storytelling being asked of him. It’s not a major problem. But it’s still a jarring misstep for those of us reading – one that is perhaps more unfortunate, than damning.

The takeaway? Don’t be afraid to get truly epic here folks. This is a space epic after all.

Other than that, the story hangs together nicely enough. After the disappointment they encounter on Tamaran, Dan Abnett wastes no time getting our crew to the next logical step in their quest: finding and confronting Darkseid.

Of course, Vic’s recently had a god-download of his own. So, I’m not entirely sure we should be trusting his judgement processors on matters related to Darkseid. For that matter I’m surprised to see that Jessica Cruz does, given her strong opinions on the matter last issue. And given that her Green Lantern power supplies are quickly diminishing.

Yet, even knowing that, and acknowledging that he needs her in the fight, Vic stays the course.

And despite the jumble of enclosed galactic space that is the Ghost Sector, that navigation proceeds a-pace. In short order the team is standing over a badly beaten Darkseid, last of his brethren, here at the End Times of All. Or anyway the End Times of the New Gods.

Darkseid’s got some ghosts of his own he’s been contending with. Good thing for him, his millennia-long machinations have conveniently delivered him his own personal saviors, just in the knick of time.

Or maybe not so good. Given Kory’s mood.

Next Issue: Deals with the Devil