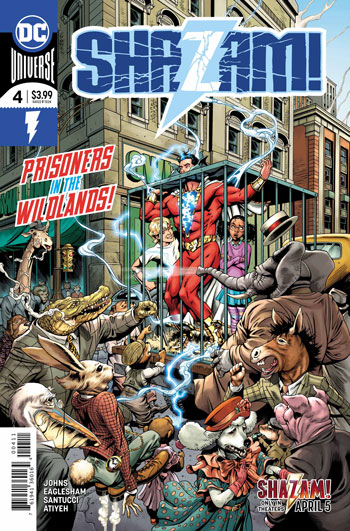 You would think that with a new Shazam! film coming out that they would try to make the comic book better than this.

This could be a completely amazing book but instead it’s a trudge. I thought maybe it would pick up but right now? It’s shockingly dull and confusing.

The first part of this issue focuses on Mr. Tawky Tawny.

He’s getting ready for the day and we get to see him in his natural world. He walks down the street and interacts with others.

And it’s all so very silly that it actually hurts to read. I tried to look away but just couldn’t.

But since we are in Tawny’s world, we just have to deal with it. And that’s where the Shazam family is.

We then pick up where we left off last issue. The family is in the throes of the King of the Seven Magiclands!

He has them captured and he carts them around and basically embarrasses them.

I spent a lot of this issue trying to figure out what this kid’s deal is. But I couldn’t quite figure it out so it got tough. It just felt like a whole pile of nonsense. It doesn’t help that it feels like Johns is writing in circles for four issues and it doesn’t get any better here. That’s a shame too.

I know Johns is capable of better than this. I would like to see Captain Marvel actually fight something or someone instead of just being a victim here. Every scene is painful to get through. By the end, I was left scratching  my head even more than I did when I first picked it up.

The art is decent but it doesn’t help because it’s all so confusing and just silly. Hopefully, it turns around after this story. Right now, I can’t wait for it to be over.