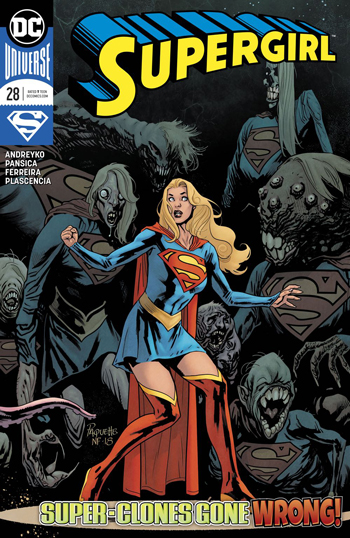 The last issue ended on a highly nutty note!

Supergirl turned into a zombie like outer space something or other. Now in this issue she’s reverted back to being her normal self. But now she’s fighting a bunch of other zombie doppelgängers!

To be fair though, Andreyko gets it under control quick. Aided by the artwork of Eduardo Pansica, the craziness clears up almost instantly.

Then, an all out brawl happens!

It’s crazy for sure but you can actually tell who is hitting who and where everyone is. That’s a huge thing for me in comics, especially nowadays.

We cut back to the spaceship many light years away where Z’ndr and Krypto are.

Z’ndr is ready to give up. Krypto won’t let him. But things look hopeless. Then, there is a signal that goes off. Could it be that Kara is alive? Krypto barks and you just know that they are going to be off to the rescue. It’s a tad predictable honestly.

The struggle on the planet Supergirl is on continues. It gets a little long in the tooth too! And then, at the most dramatic possible moment, Z’ndr and Krypto show up. And everyone is happy!

Meanwhile, there is a cult growing that worships Rogol Zarr. They seem to want to retaliate against Kara and the gang. What’s going to happen? What’s their dastardly plans? This is the cliffhanger that we end the issue on!

And it’s just fine. It’s not terribly great nor terribly bad. Again, the art of Pansica helps. But beyond the rescue, storywise, we are at the same place Andreyko began the issue at. Hopefully that changes next issue, but it was a glaring problem for me as a reader.