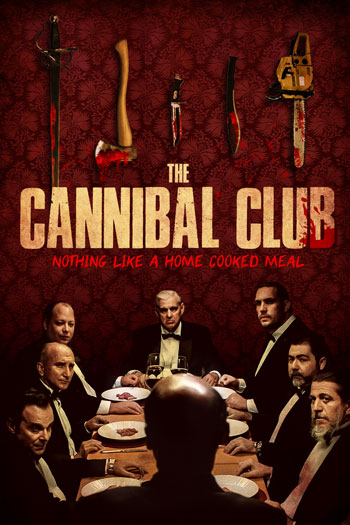 Brazilian horror satire is a slight, but interesting, haves vs. have nots flick that in the end is a bit TOO slight for its own good.

Otavio owns a security company that caters to the wealthy and well-to-do.

Then, as Gilda climaxes, Otavio murders the caretaker, and Otavio and Gilda cannibalize the remains.

Meanwhile, Otavio is a member of the elite Cannibal Club, overseen by Congressman Borges. These chums congregate at a secret location at a designated time to observe lower-class hires make love then get hacked up for the gourmet dinner.

It’s very Eyes Wide Shut with some added gore and no cool masks.

Things take a turn when Gilda witnesses something at a social party that may put her and Otavio’s lives in danger.

Okay. So, The Cannibal Club has some things on its mind other than sex and gore, and that’s great.

However, the final result is a bit all over the place and is really only effective in fits and starts. The acting is overall quite good, it’s certainly polished and nicely put together, and the location work is stellar.

But The Cannibal Club never sucked me in. While they’re interesting characters, Otavio, Gilda and Borges are utterly repugnant, so it’s tough to be invested.

And the social commentary is quite heavy-handed. I mean, the rich eating the poor, mingled with scenes of said rich openly and blatantly deriding said poor? Subtle it ain’t.

The end result is an odd mix of underbaked story elements mixed with an overbaked style.

The climax of the film is tense and exciting and a character introduced late in the game holds the attention.

But it’s a bit too little, too late.

Really, The Cannibal Club works best as an examination of a hugely dysfunctional but certainly not loveless marriage, but falls short a bit in its other ambitions.

But hey, it’s never dull and it clips along at a decent pace. I just wish it had a WEE bit more to offer.

The Cannibal Club is now playing in limited release and arrives On Demand on March 5th.