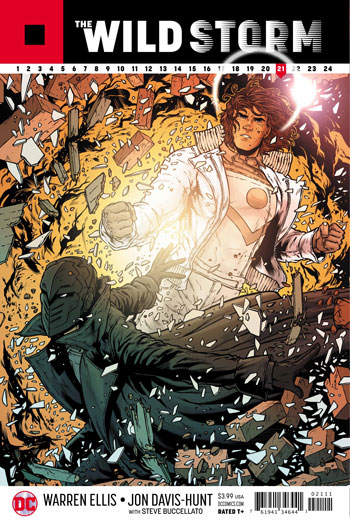 This book was amazing. As this comic gets closer to its conclusion in issue 24, Warren Ellis really picks up the pace!

It’s fast and exciting and you can’t believe your eyes! It’s also incredibly smart and just well done. They don’t make comic books like this anymore!

After the events of last issue, the Apollo and Midnighter are on the run. This leads into a scene which I didn’t know what was happening at first. It seemed like a bunch of talking heads. Boy, how wrong I was. What Warren Ellis was doing what actually bringing the Authority group together. And it’s awesome to see.

The crazy super team that we haven’t seen in a while!

Ellis shows them coming together and it’s one hell of a story. That formation of the group takes up a lot of the issue. It’s all incredibly involved but also incredibly interesting and entertaining.

We also get another great scene with Laura and Henry Bendix talking.

Laura makes a confession to Bendix and it’s a heart breaking scene. You have to give artist Jon Davis-Hunt a lot of credit here. He can make a scene with no action happening just as interesting as anything else. He’s really amazing and more than earns his paycheck here.

By the end of the issue, the Authority has formed and the status quo has changed.  It feels as though the setup is completed yet and that the last three issues will be completely insane. The creative team has a lot to live up to. But I think that they are more than capable of living up to the challenge.

Warren Ellis and Jon Davis-Hunt are one of the best creative teams currently working together in comic books. This book is sure to be a classic. It’s been an interesting and downright strange time. I can’t wait to read it all together.