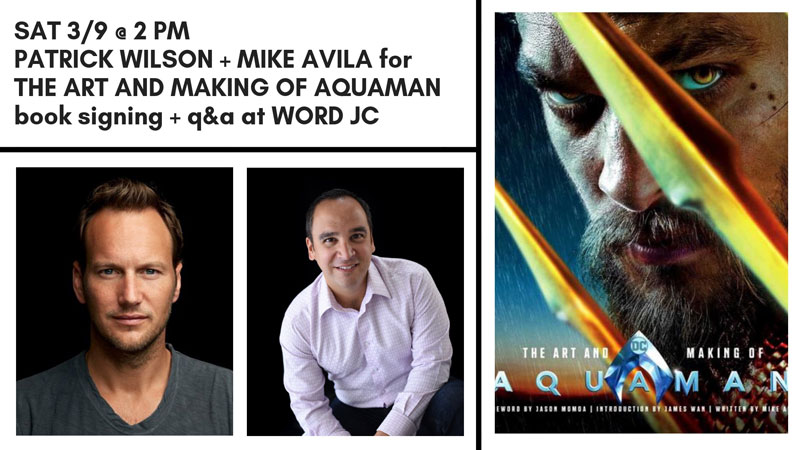 DC’s Aquaman finally made his box-office solo-story splash this past December, and has commanded over $1.1 Billion in worldwide box-office to date.  Domestically, it ranks as the third highest “underwater” film, according to BoxOfficeMojo.com. Technically, it’s the all-time #1 non-animated movie to feature characters submerged under water (non-submarine).

Even more amazing, it’s now the #1 movie to feature sharks with frickin’ laser beams attached to their heads.

The James Wan blockbuster left many of us wondering how-in-the-Trench the filmmakers pulled off the visual bonanza of comic-to-screen wishlist battle-sequences.  The making-of story is even more fascinating, considering the risk Warner Bros. took after disappointing Justice League audience reactions and ticket returns.

DC Comics fans in the New York City area are in for a very special treat. WORD Jersey City is presenting a special AQUAMAN ticketed event this Saturday, March 9th at 2pm.  They’ll be hosting Emmy-winning author Mike Avila in person with his lavish book The Art and Making of Aquaman, along with none other than Orm Marius himself, Patrick Wilson.

Patrick and Mike will be giving an exclusive presentation on the book, going into first-hand accounts from behind-the-scenes.  Emmy, Tony, and Golden-Globe nominee Patrick Wilson is, of course, no stranger to big-budget Warner Bros. spectacles, having starred in both The Phantom of the Opera and Watchmen.  He’s also a common lead in the films of James Wan, having worked with the acclaimed director previously in The Conjuring and Insidious.

A brief period of questions from the audience will follow the event, then move to a signing of approved Aquaman merchandise sold at WORD.  While supplies last, that includes the new Funko Pop Heroes collectable of Orm.  Both Mike Avila and Patrick Wilson will also be signing the book which is included with the purchase to the event.

Advance purchase of The Art and Making of Aquaman is required for entry into this event.  The store will close early at 1pm, then reopen for ticket holders only at 1:30pm. Children are allowed into event only if accompanied by an adult purchasing a ticket.

TIckets can be purchased directly here.