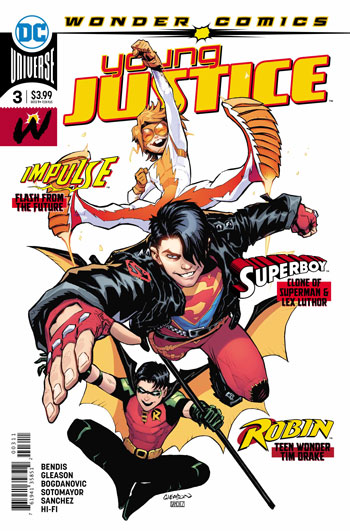 Last month in Young Justice we were given a few insights into the recent life and times of Cassie Sandsmark, Wonder Girl.

This month it’s Conner Kent’s turn, and that’s appropriate because just like Cassie, we haven’t seen much of Conner lately.

Though, arguably, it’s been even longer than that since Bart Allen’s seen him.

Thankfully for everyone involved, it appears that Conner Kent’s fate has become as inextricably linked to Gemworld as the rest of our teams’ have now become. The consequences of which are initially down-right bewildering, only to become more and more surprising as we go.

Take S.T.A.R. Labs. After all – it’s always something with those guys.

Well, looks like the ‘something’ in this case might be central to our whole situation here. But for Superboy, at first, it’s just another secretive bunch of lab coats out in the middle of nowhere, up to something big and sneaky, and distracting him from an otherwise normal life once again.

And while he’s pretty much entirely down with the distraction, Conner Kent has never been much a fan of lab coats…

It’s almost a perfect set-up, and while that definitely suggests something about author Brian Bendis’ approach to the plotting of this book, it’s very nice to see that this same grasp of his character translates into a spot-on portrayal of Conner in dialogue and action.

After all, this is a young man cloned from both the DNA of Superman and Lex Luthor – something, by the way, which is now officially a thing again by the sound of it – and that means our young master Kent has a strong true-blue streak to always do the right thing, even if his decision-making process tends to be… less conventional than most.

Or, then again, maybe more-so.

Long and the short of it, Conner Kent’s spent a few cycles on Gemworld himself by now, throughout and despite whatever dark changes and Game of Thrones geopolitical upheaval have been sweeping across the royal courts of the land.

He’s right where he needs to be too, when Impulse drops into his world from our own. It’s something Bart seems to do well, locating his old friends out of nowhere, even though he’s not had as much success finding his family over in the pages of The Flash.

Which itself is a curiosity, one that seems to be simply baked into the new series overall at this point – because, of course, none of these people, in their current iterations, should remember Bart at all.

But they do. Fondly, too.

Maybe it’s got something to do with Princess Amethyst’s alarming claim at the conclusion of this issue, that ‘reality itself is falling apart’. After all, Amethyst just might be better equipped to fix that all by herself… if she wasn’t any longer all by herself.

Because next issue it’s all about Amethyst and the new, harder history of Gemworld – one that stretches all the way back, through Seven Crises of Earth.