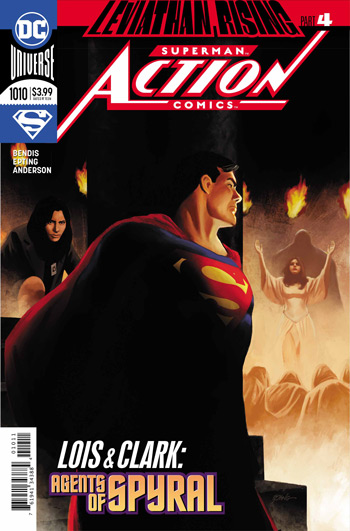 This is the book in which writer Brian Michael Bendis has been using to angle towards the big “Leviathan” event this summer. It’s a little disappointing as this book is at its best with smaller stories. The whole Bendis run here seemed at first to be about those smaller stories.  Maybe the event will be good, I’ll have to give it a shot. I just hope it’s not overblown as it seems it could be.

The issue starts with Director Bones being interviewed by Kate Spencer. Bones saw the thing known as Leviathan and Agent Spencer is trying to get some details off of him to figure out just what Leviathan is. It is actually a pretty harrowing opening scene and Bendis shows is what he is capable of when he is focused. I was intrigued to learn more at this point.

The scene takes a hell of a turn.

It makes for the strongest opening of any of Bendis’s books since he took over. I was excited. Then, we see Lois and Clark flying over the city of London or, as Lois calls it, “Peter Panning.”

This is where the book started to feel a little weird.

Lois and Clark are teaming up and going “undercover.” So, the first thing that they do is fly above London? Clark’s choice of undercover is kind of a strange choice but whatever. I went with it and then I wanted to see where it went.

And then it became a little much. Lois and Clark aren’t undercover long before Clark has to become Superman. Bendis doesn’t even give us suspense at this point. Just payoff after payoff. It starts to feel a bit rushed.

We also get a scene with Jimmy Olsen and Amanda Waller in the Fortress of Solitude. The scene felt a bit unnecessary and a lot forced. Jimmy asks if Waller is Leviathan but it doesn’t make much sense why these two characters would even meet in the first place.

Superman eventually confronts Leviathan (or so he thinks) and then Lois disappears. And that was the entire issue. It is at this point that you start to realize how tepid this issue really was.

At least the art is good. Steve Epting is a fine artist and he alone is worth the price of admission. Who knows where the heck this whole thing is leading? Maybe it’ll surprise us all. But right now? Bendis is just spinning his wheels.