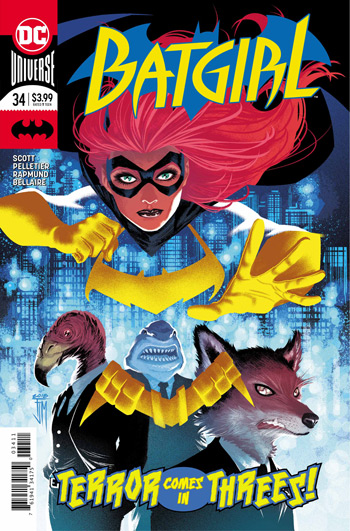 This issue was a little better than the issues that preceded it. In fact, it might be writer’s Mairghread Scott’s best issue of the series thus far. That is not to say that it’s a completely successful issue but it’s definitely a little more interesting than where we have been.

The opening sequence is admittedly very silly. We see The Terrible Trio together having dinner. They are talking about a scheme they are putting together involving Batgirl. It’s a bit hammy and it went on a little long for my tastes.

From there, we see Batgirl traversing about the city. She makes a stop as Barbara Gordon to Congresswoman Alejo’s office.

The Congresswoman just won her campaign and everyone is completely thrilled! That is, until a box shows up and it has a hand in it! And there is a note with a threat to Batgirl!

What the heck is going on?

Well, Commissioner Gordon shows up at the scene and starts nosing around. Then, the Commissioner and Barbara have a fight. It’s at this point that Barbara decides to get her Batgirl gear on and do a little bit of investigating!

That leads to an actual brutal fight with the three animal type villains from the beginning of the issue. And there is no holding back on this one. The creative team actually made me sit up here. The cliffhanger is pretty brutal too and I’m actually excited to see where this story takes us.

This is a vast improvement over previous issues. The art is still lacking a bit, but until Pelletier is off the book, it’s just going to feel that way for me. But this again, is much stronger than previous issues. Let’s see what happens from here.