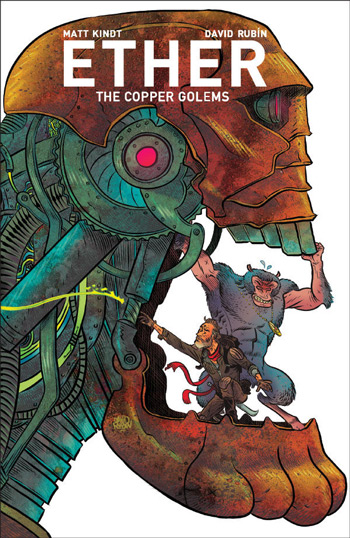 I loved the first volume of Ether. It was a nice science fiction/fantasy story that had some amazing art to it. When I first read it, I was excited for more stories set in this universe. When the second volume came in, I was super pumped! I immediately dug in and started to read it! Was my excitement and patience rewarded?

At first, I was unsure. It started off with an interesting premise in the first few pages. Boone Dias is in jail at the start of this story. He looks older and more bedraggled from when we last saw him. He is called out of his prison cell and brought into a room.

A woman is sitting there. She tells him that he has to go back to the Ether. Even more so, he has to contend with a newer threat called the Copper Golems. It felt very basic to me and not very deep. But then I realized I was completely wrong.

The reasons the Copper Golems got loose are explained throughout the volume.

But man, I wasn’t expecting the emotional wallop that follows. The woman who called him in is his daughter. She is older now and it’s an emotional start to the book. It felt a little obvious, but again Kindt had a longer story in mind than I realized at first. It isn’t long before Boone is sent into the Ether.

And that’s where things really just go to absolute hell.

We get to see him travel the various levels and dimensions of the Ether. He picks up a ragtag group of creatures this time around as well to join him in his quest. It seems very simple and a very straightforward story. But slowly, Kindt reveals his master plan. And it’s absolutely stunning.

The story has Boone deal with the Copper Golems and their problems. But it’s not about that. Its actually a story about great loss and wrong choices. It’s a story about heartbreak. Boone gets to see his daughter at various points. And she just gets older and older and he becomes more and more detached. It’s devastating to read and feel. By the end I was emotionally drained.

The art is gorgeous and feels completely perfect. David Rubín is one of the bests. Here, he proves why. He even shows constant improvement each and every time at bat.  I’m calling this as one of the best books of the year already.