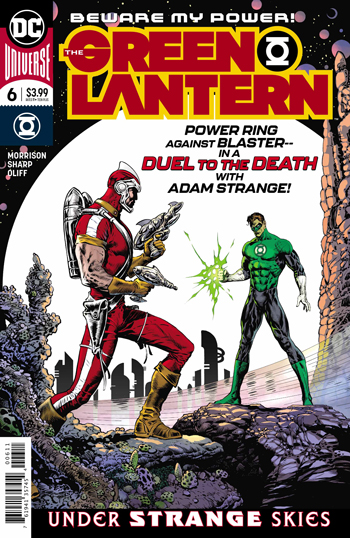 “Mu’s lesson was for you Blackstar Parallax.  You’re a part of us now, whether you think you are or not.  Everything you do is what we want you to do. Every action advances our cause.”

I hope you’ll forgive me if I don’t know what, exactly, to think about this issue.

Writer Grant Morrison is clearly following a pattern, but it’s one of his own devising. And there’s quite a bit, by the end of this issue, that remains unclear about that.

Except that, on the surface at least, it does not all completely make sense. Yet.

Take, for example, the impossible situation Hal Jordan finds himself in at the outset of this month’s issue, squaring off against his old friend and colleague, the space-farer Adam Strange, in a duel to the death to satisfy the whims of his new bosses, Countess Beelzebeth and the inscrutable Controller Mu.

Infiltrating the Blackstars and neutralizing Controller Mu is the job that Hal’s been tasked with by the Guardians. Unfortunately, Controller Mu has targeted the planet Rann – a rather aggressive new play in his quest for universal dominance, given Rann’s status.

Dominance is required however, and an example must be set. So, Adam Strange, protector of Rann, and consort to Rann’s chief scientess, the lovely Alanna, has been marked for death.

At the hands of his friend, fellow Earthman and disgraced Green Lantern, Hal Jordan

Of course, we know that Hal is only play-acting to prove his loyalties to the Blackstars. We know that he’d never intentionally hurt Adam. Right?

It’s a tense, high stakes scene of court intrigue under strange skies, with a cast of characters worthy of a young George Lucas. With the able, Heavy Metal pulp artistry of Liam Sharp to match the tone.

The first of many it seems. We’ve barely had the chance to appreciate Hal’s grit under pressure, when Mu casually reveals a rather striking knowledge of Hal’s true intentions. (Almost to the letter of Hal’s instructions. Hm.)

Worse, he immediately ups the ante with a threat that is utterly nihilistic, and yet again, seemingly impossible for even the very best of the Green Lanterns to manage.

All while claiming utter control of the narrative.

It’s crazy talk of course. (Isn’t it?) Mu’s counter-punch to Hal’s expected betrayal is so extreme, so destructive, it cannot possibly be to his or anyone’s advantage. (Hm. Sounds familiar, that.)

And yet he needs something from Hal, something Hal is unlikely to provide willingly.

And the fanatical certainty that Mu has of his own ordained pre-eminence, under circumstances that suggest anything but, does plant an ear-worm in the brain.

One that suggests something deeply sinister, and deeply dangerous, about Controller Mu.

One that makes us wonder whether Hal Jordan hasn’t managed, finally, to get himself in over his head.

For Mu is the self-professed ur-Controller, and with his new weapon of Dominant Will nearly complete, the stakes for the universe could not be any higher.

This battle of wills is far from over, surely. No matter what the events of this issue might have us believe.

In the meantime, the pattern of our story has totally shifted. Everything that went into getting Hal in close to Controller Mu as an undercover Blackstar over the last 6 issues, has been blown entirely out of the water.

The consequences of which have landed Hal Jordan in a realm beyond reason, on a quest to find himself, in a landscape drawn seemingly from our deepest imaginings.

Somewhere deep within the Heart of his ring.

Next Issue: Down the Rabbit Hole