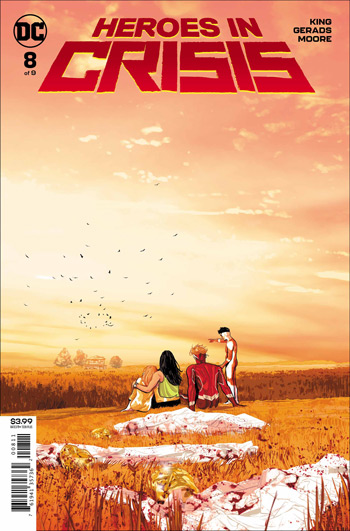 “I put the body next to Roy’s. It seemed right. We were there, y’know, at the start of things.”

There’s so much to say about this issue. And all of it involves spoilers.

I’m not happy about any of them.

But we do get our questions answered. Almost all of them.

And it’s almost as bad as you’ve probably imagined.

The picture we get of what occurred at Sanctuary on the day of the slaughter that’s rocked the DC Universe, is a genuinely tragic story resulting from the sort of extreme comic book circumstances that a place like Sanctuary was designed to address, and made possible only through a sequence of extreme comic book incidents that only someone known as the Fastest Man Alive could ever manage to carry out.

And even then, it stretches credibility.

Get ready. It gets complicated.

But the impossible seems to be the order of the day in this series, beginning with the wonder of Sanctuary itself, stretching through a remarkably quick-thinking use of hijacked time travel, to whatever it is that’s happened to Wally West in the five days since the murders to endow him with such a miraculous mastery of life-giving electrogenesis.

So what are a few more mind-bending miracles, give or take?

Remember in issue #7, when Barry Allen, Wally’s uncle, zips back and forth from the Batcave as the Flash, in a mere matter of seconds managing to search the entire continents of Africa and Europe? Well that was a clue. Because that’s the level of super-powered astonishment that allows for everything we could not understand about the murders at Sanctuary, and the few clues we had about what seemed to happen that day.

Like how Booster Gold and Harley Quinn could have such different memories of Wally’s death. And how Wally could be dead at all, when he’s clearly been ping-ponging around somewhere out there for 5 days. And how could a place of healing and peace like Sanctuary so suddenly become a murder ground in the first place.

The answers all lie in the freeze frame spaces that exist between the seconds of a clock.

As much as we may not want them to.

A barrage of the impossible. But at the core, it comes down to something all too real. Because even heroic super-powered godlings have their limits. And some of them are not meant to be tested. Some consequences go beyond us. And some things are too hard for the human heart to bear.

I’ll say this about Wally West. Whatever you may think of the story Tom King spins out for us, wherever you might find yourself inclined to place blame – if you even do so at all – to the core, and to the end, Wally West is a hero.

The nature of comics stories requires that our favorite characters are forever tested. Sometimes they experience true tragedy. And sometimes that tragedy changes them. Superboy-Prime comes to mind. The Dick Grayson of current DC chronology does as well.

(And by the way, has anyone else noticed that Tom King really does seem to have a thing for tearing down the original Teen Titans? Hm.)

But when faced with truly soul crushing circumstances, and with every reason in the world to succumb to his weakest impulses, Wally’s first instincts remain that of a hero.

It’s not enough to merely take responsibility for his actions. Given the chance, a chance uniquely afforded to him given the power at his disposal, Wally’s thought is not to escape his actions… but to rectify them.

And in this issue, he does. As best he knows how. With all the power at his disposal. As a hero. As a man.

Think what you will of the tragedy of Wally’s story, at the end of the day, there is one solution he doesn’t even consider. Because as we’ve already seen, even though the Speedforce is no longer a time-travel medium, Wally does manage to work out a way to travel through time.

But he doesn’t choose to go backwards. Even though that would solve a lot of problems.

Unlike his own uncle Barry, Wally does not try to reset the timeline for his own selfish purposes. Presumably, he knows how dangerous that is. And he has a code. Even though he has lots of reasons to consider it, all he chooses to do instead, in the end, is take responsibility for his actions and to try and make amends.

Which, I mean, good for him. Though I’ve got to say – it seems a damn shame.

Mind you, not all of the DC hero set are quite as true blue, or even as sane, as Wally West.

And last I recall, a few of them are on the way to try and save the day…

Next Issue: What’s one more miracle, give or take?