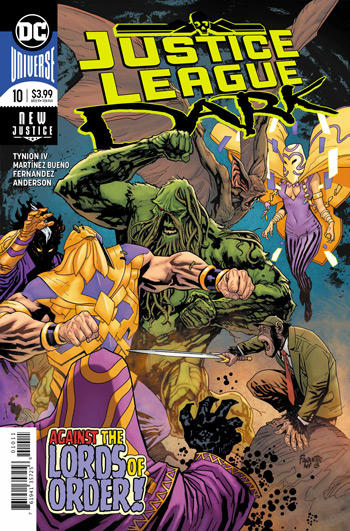 “A great action requires a great sacrifice. Magic will die but the Multiverse will live, there is order in that. More order than there ever has been in magic…”

OK, let me see if I have this straight.

Nabu, the Lord of Order who has time and time again assisted Kent Nelson in the defense of the Good through the helmet of Dr. Fate, discovers that because of the crisis of the Source Wall and the return of Perpetua, the Otherkind of the Dark Multiverse have decided to invade the Multiverse and claim it for their own.

In other words, the millennia-long campaign of the Lords of Order to contain and harness the dark forces of magic have failed to prevent this imminent destructive doomsday chaos.

Faced with this, Nabu decides the best course of action is simply to eliminate all magic in the world. Entirely.

This, despite the fact that the literal Tree of Wonder, an embodiment of this prime cornerstone power of Creation, has manifested on his very doorstep.

Apparently, Nabu is convinced that by destroying the Sphere of the Gods, from which the true power of all earthly magic flows, he will be depriving the Otherkind of the magical nourishment they crave in our Multiverse. Allowing him and his fellow Lords of Order to then seal them away forever in the Dark Multiverse.

To do this he has allowed the Otherkind to infect reality and consume the magical beings of earth, and now he and the other Lords of Order are wielding the remains of magic itself to destroy all the magical worlds, like Myrrha, like heaven and hell, like Gemworld (!), and then the very source of all magic itself, the Sphere of the Gods. Thereby, presumably, saving the Multiverse, in an ultimate act of magical suicide and self-negation.

All in the name of Order.

Yep, no. That still sounds insane. This explanation does not change my opinion.

The fact that the argument actually seems to sway Nabu’s fellow Lords of Order does little to convince me.

For one thing, I’m in good company. Khalid and Kent Nelson, both one-time apprentices of Nabu’s, both of them at one time or another having wielded the mantle of Dr. Fate, both clearly disagree with this plan. And both of them get shut up – quite literally shut away – for their troubles.

At least that’s the story our heroes get from Khalid this issue.

Before the Lords of Order destroy Myrrha.

There’s something else that makes me wonder what else may be going on.

It’s notable that even as the Lords of Order begin dismantling the very fabric of Myrrha’s reality, they still seem to be quite susceptible to the sheer joy of wielding their power. That realization is immediately shot down with the admonishment that emotions breed chaos. But do they? All emotions?

It’s interesting how many different things seem to breed chaos according the Lords this issue. Emotions. Beliefs. Stories and ‘Fictions’. Possibility itself. All domains which have been the very source of the Lords of Orders’ own power for aeons.

Nabu himself however, at the very outset makes it quite plain that one of his own motivations for concocting the (insane) plan to kill off all magic, is… horror. Horror at what has come to pass in the Multiverse. Of what may yet happen at the hands of the Otherkind. Of their failure to prevent it.

But horror is an emotion. And if emotions breed chaos, then just maybe, this is all playing into someone else’s hands..

Perhaps my suspicions have something to do with the fact that author James Tynion gives us a window onto other parts of this story, specifically the unfolding revelations that Zatanna and Wonder Woman are getting from Circe about just how long certain parties have been preparing for the events that are currently unfolding.

Certain parties like Zatanna’s father, the Golden Age magician Zatarra. And Mordru, Lord of Chaos, who was consulted by Zatarra long ago, along with Circe herself, at which time both were presumably given plenty of forewarning about what is now coming to pass. Among other people.

The fact that Circe is still keeping secrets from Zatanna and Wonder Woman – not the least of which being the witch mark she claimed from the Goddess Hecate recently – does raise the possibility that Mordru, however much he may eventually prove helpful against the Lords of Order, or the Otherkind themselves, may very well have similar self-serving ideas of his own.

In fact, the only one who may, in the end, have the best interests of the League, and earth, and magic itself in mind… is Zatarra himself. Which would make everything that’s been unfolding since the Totality broke free – from the Otherkind, to Hecate, to the Lords of Order, to Mordru and Circe – all a very dangerous gambit indeed.

To which I say, c’mon Zatanna. Sure, it’s not fair. But if it hasn’t occurred to you yet, it surely has to almost everyone else: Your father’s counting on you.

Next Issue: League of Pantheons