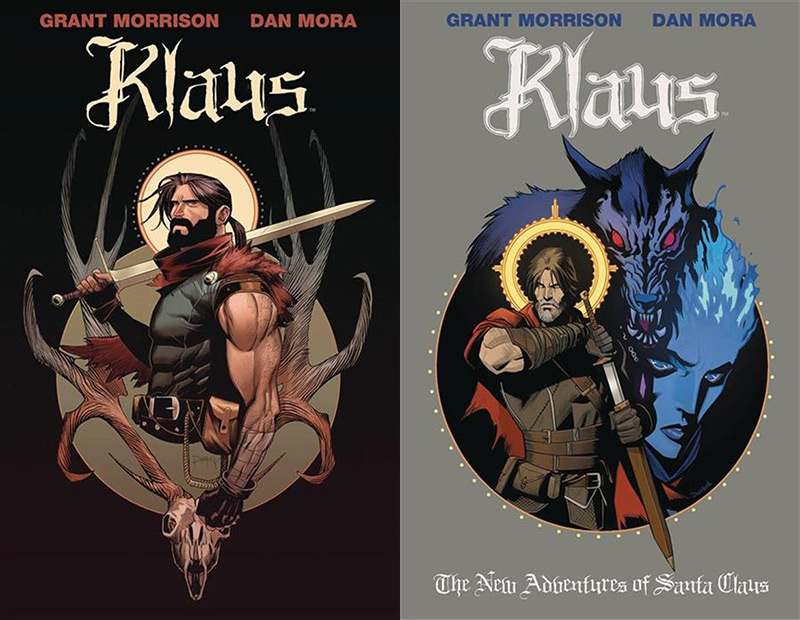 I’m not big on Christmas stories anymore. I’m old and jaded and don’t even put up a tree these days. That said, I think I may have just been introduced to the best Christmas stories I’ve read in years, and from the unlikely source of a Scottish writer and a Costa Rican artist.

Klaus, by Grant Morrison and Dan Mora, came out a while back. In a roundabout way it tells the origin of Santa Claus if he had been created as a Silver Age Marvel Comics character. The epic adventures of the Mighty Thor by Lee and Kirby or Thomas and Buscema echo loudly through this first volume with science, magic, romance, and pseudo-Shakespearean melodrama all intertwining neatly to tell us how the legends started.

The basic story tells of a hunter who returns to a town where he grew up only to find it a dark and grim place, taken over by an egotistical dictator, his wife, and young son.

It’s the story of Santa, yes, but it’s hard to ignore the many parallels to Donald Trump’s administration, even though it’s almost definitely coincidental considering when this was originally released.

Morrison, of course, is a noted student of comics history. He knows the rules and so has never been shy about breaking them. Here, though, he does a masterful job of straightforward storytelling in the traditional macho hero mold. None of this would be half as impressive, though, without Mora’s consistently amazing artwork. This includes a bizarre psychedelic interlude or two!

Klaus: The New Adventures of Santa Claus, is the newer volume, a completely different animal than the first. Klaus and his wolf sidekick Lilli return, only it’s now in modern day, and our hero comes with tales of being imprisoned on the Moon for ages. We don’t get a lot of details though as he’s immediately thrust into a massive scheme by the Witch of Winter and sets out to rescue kidnapped children from his own old friends.

The reader is presented with more background on how Santa Klaus has progressed since the last time we saw him but much of it is left for the reader to infer based on the art and text.

Again absolutely stunning visuals from Mora and well-defined characters and dialogue from Morrison, who seems to have morphed into a more benign Alan Moore over the years. Everything he does is worth a look, even though you may not always like it.

Just when you’re sighing a deep, satisfied smile at that adventure’s end, though, there’s yet another one to go! Klaus and the Crisis in Xmasville shows us more of our hero’s old friends, as well as a major old enemy, and once again more of what feels like the real Christmas spirit than a dozen Hallmark specials.

Whether you still believe or you’re an old Grinch, if you’re a comics fan, these Christmas outings work on so many levels that you’d be silly to pass them up.