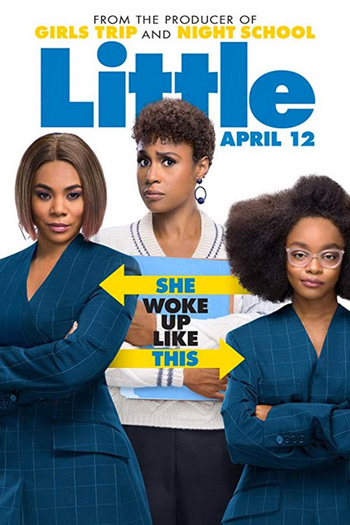 What were you doing at thirteen years old?

If you happen to be Marsai Martin, you were making history as the youngest executive producer in history with your new empowering comedy Little, skipping the whole way to the bank.

This fresh take on the body/age swap genre best known for Big, Shazam!, and 13 Going on 30 takes the rare chance on letting the film ride not on an adult actor pretending to be a child, but a strong young actress embodying an adult woman. And Martin shows that she is definitely ready to sit at the grown folks table.

The movie follows Jordan Sanders (adult version played by Regina Hall), a stylish and ruthless corporate tech company owner who learned early in life that you bully them before they can bully you. Her long-suffering assistant, April (Issa Rae), takes the majority of her ire but she still has plenty left to cause everyone in her path to duck and cover. Issa Rae immediately comes off as warm and put-upon, and her under-the-table clapbacks are hilarious. There was a worry that the best moments were pulled for the trailer, but within the first 15 minutes you’ll know that the laughs are large and consistent.

On the other end of the personality chart, there is not a single redeeming thing about Jordan in the first half of the movie. She is villainous through and through, making the Grinch seem as timid and kind as Piglet.

Storming through work, employees jump out of the way, hide, and burst into tears if they become her focus. Regina Hall plays an excellent tyrant, and has a lot of fun living her best and cruelest life at the expense of others. The only person that may deserve less sympathy is the stereotypical white male tech mogul Connor (Mikey Day) who threatens to take his number one client status to another company if the controlling Sanders cannot produce fresh ideas within 48 hours.

When a charming little teenage #BlackGirlMagic practitioner wanders into the lobby after a disastorous pitch meeting, she refuses to be undone by Jordan and swears that she would “check her if she were little too”. With a wave of her wand, Sanders is knocked off balance and wakes up to find herself back in the awkward 13 year old body she loathed, bringing Marsai Martin into the film surprisingly late for this type of film.

Martin never drops into a traditional child role, and channels her inner diva with every side eye and sly remark. April finds herself still bossed around by this little overlord until she is forced by Child Protective Services to enroll her in school, where Jordan finds herself brought right into the unresolved  insecurity and fear that got her into this mess.

The school scenes are admittedly slower and less fun than watching a 13-year-old troll a grown woman about her love life. But isn’t that what we would happen? It would not make sense for the best scenes to be with other kids, and even though it does drag a bit the process makes sense. Eventually, she does help the other nerdy kids out but the best moments are her growing relationship with April, and the slow reveal of how everyone feels about her since they can open up to a child in a way they never would to their demanding boss.

This film works on many levels, not solely due to the witty, warm, and most importantly believable dynamic between the always funny Issa Rae and the incredibly mature Marsai Martin. They use humor that is physical and culturally relevant while leaving much low-hanging lewd fruit on the tree. There is only so far you can go, realy, before a joke about a grown woman in a child’s body hitting on a grown man gets uncomfortable (hint: the distance can be measured in millimeters) but the film walks up to the line and stops.

Little manages to grow this genre in a way that it has not seen since Big, by allowing us to laugh like adults but believe in a level of redemption that you could only achieve by going back to the start.