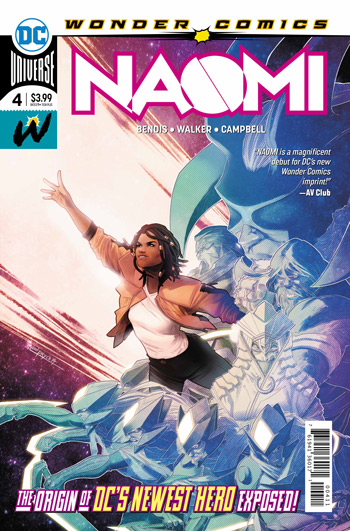 This is a book that started off pretty solid and then gave us too much too quickly.

And then the revelations of what we learned last issue just were not terribly exciting. I wish it was better but it just is all over the place.

The promise of that first issue is lost to a bunch of silly plot contrivances and giving the reader too much all at once.

The issue starts off with Naomi and her mom and dad in a cave with a spaceship. The spaceship is made of something that isn’t of this world. It’s actually a pretty intriguing opening scene.

That is, right until we see the war torn place that Naomi’s parents are from.

And it just feels like we have seen this before. And it feels like that it was done better when we saw it before. It’s a bit sad.

Still, there are some nice touches. Naomi’s father has a mission on Earth. He needs to find a threat on Earth and get rid of it. And that threat might actually be someone that Naomi knows.

Hell, it might even be Naomi herself! There are a lot of questions raised. It’s actually pretty intriguing after you get past a bit of the alien attack silliness.

This book however does suffer a lot from the Bendis style of telling a story in a decompressed manner. The whole book is basically revelations happening over and over with Naomi’s parents talking to her inside of cave. We never leave the cave in reality. So it feels like nothing much happens by the end of the book.

The art by Campbell is the best part. He’s got a future in the business and will most likely be a star in the years to come. He’s the reason to really come out to read this book. The other stuff isn’t bad, but he is the standout for sure.