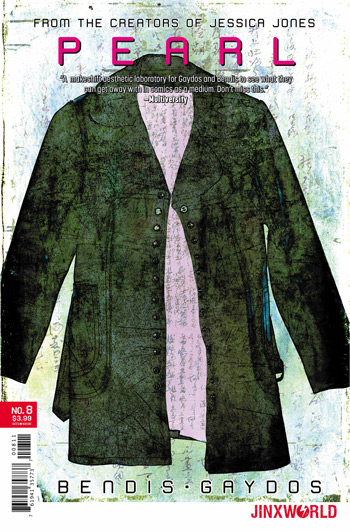 This book had a good first six issues. Now I’m not sure I know where it’s going. The dialogue is fast and smart and the illustrations are fantastic. But I’m not sure Bendis has this book in focus.

Maybe he will prove me wrong but right now I’m a little lost as to where this might be going.

Pearl has made the trip from San Francisco to Japan. She is trying to uncover some truths about the clan she is a part of. We first see her texting on the streets of Kobe. She goes into a club with an intent to get some answers.

And that’s when things get shot to hell.

Pearl runs into her cousin Niko who she has never met. They have an overlong scene filled with hip dialogue.

Then, we get a flashback from the day before where Pearl was in Portland, Oregon. And that is when it starts to get a little out of hand to be completely honest.

It’s so jarring going from place to place from flashback to present day that it is a bit hard to grasp just where we are in the story. Pearl is looking for someone who can get her dad out of jail. And so we are treated to yet another overlong scene with hip dialogue which at this point was starting to make things monotonous.

Pearl needs Mr. Miike’s help to achieve her goal. So they decide to take a trip to Japan. We have a long scene on an airplane that doesn’t amount to much. And so, we end up where we started at the beginning of the issue. Oh, and Rick shows up at the end and says that it ended up that he “had enough air miles.” And that’s basically the whole issue.

The art is the best part. Gaydos is fantastic and really makes the most of what he is given by Bendis. I just wish something more interesting would happen. I also wish Bendis would tell the story in a linear fashion here as it would help. This issue felt like a collection of deleted scenes that didn’t amount to much at all.