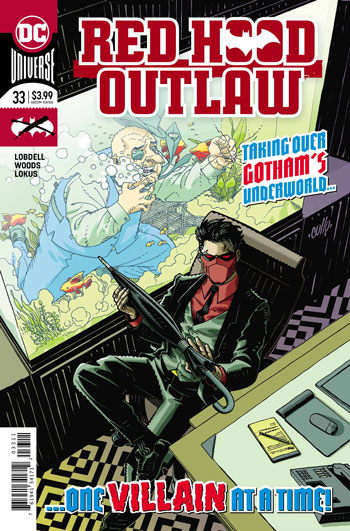 This book has picked up steam like I could not believe. Scott Lobdell is taking this title and putting it into overdrive. It’s been a continuous thrill ride that is incredibly enjoyable. This is one of the best and most consistently great books in the DC line of books.

The Penguin is missing and it seems Jason Todd has kidnapped him!

That’s right! He has the Penguin and he isn’t letting him go! He put old Cobblepot in a self-made panic room, too.

Needless to say, the two of them have some very strong words and points of view to say to each other. It’s a hell of a start to the issue and it’s also quite fun as well.

Jason looks at him and says “if I wanted you dead, you’d be dead.” Miguel shows up, and Jason goes to talk to him.

Meanwhile, the Penguin makes it known to the audience that he is indeed going to escape this panic room.

It becomes a real suspense thriller as Lobdell keeps all these tense plot lines going. He puts a lot of balls in the air but he knows how to maintain them. The rest of the issue is Jason trying to keep the casino he is in together. We also get tor see some of the Penguin’s minions who he hasn’t seen in a week putting two and two together. It’s really a blast to read.

Eventually, the Red Hood launches into action and there are some incredible moments at the end of the book. Nothing is resolved at the end but that’s okay. It’s still a fantastic read and, as usual, I can’t wait to read the next issue and it can’t get here fast enough.