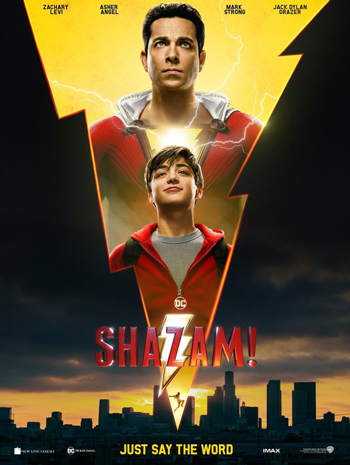 If the new directions (and financial success) of Thor: Ragnarok and Spider-Man: Homecoming tell us anything, it’s that audiences are rewarding a bright and fun superhero movie after years of darkness and tortured despair plaguing the genre.

DCEU gets into the camp comic game with Shazam!, a breezy but heartfelt adaptation that absolutely deserves that exclamation mark.

How could a combination of the general storyline of Big and every child’s second most popular wish (superpowers!) do anything but bring out the best?

Billy Batson (Asher Angel) is a 14-year-old orphan on his seventh foster home. While his new foster brothers and sisters try to welcome him in, he keeps to himself and refuses to open up. But when Billy takes it on himself to step up to defend his brother Freddy (Jack Dylan Grazer), who is disabled and singled out by school bullies, he is chosen by an ancient wizard (Djimon Honsou) to transform into adult superhero Shazam (Zachary Levi) and protect the world against the recently released Seven Deadly Sins. With help from Freddy’s vast superhero knowledge and his own personal journey, Billy learns there it will take more than cool powers and a tight suit to beat the evil Dr. Thaddeus Sivana (Mark Strong).

The film starts slowly, but picks up steadily as Shazam gets a feel for his powers in the most current of ways: a series of superhero ability tests immediately uploaded to YouTube. The disregard for consequences of any actions, like jumping straight through an office’s windows, speaks to both classic superhero movie tropes and the perceived invincibility that all teens wander the world with.

Asher Angel’s charm and wit make him an immediate draw. His transformation from sulky teen to caring brother is genuine and in the most emotionally charged moments his skill matches or exceeds his adult co-stars. Angel benefits from an excellent partner in Jack Dylan Grazer. There is an earnestness in his portrayal of Freddy that screams for the need to be seen and loved and understood without drowning out the fact that he is really the brains of the operation. His encyclopedic recall of all things hero is constantly being used to explain Billy’s motivations and powers. At times, it seems like we are being spoon-fed the exact way writers Henry Gayden and Darren Lemke want us to feel, but generally it works to give speed and direction to Billy’s mastery of his powers.

To embody the spirit of a 14-year-old, there is no better casting than the always-eager Zachary Levi. You can see glimpses of his small-screen previous accidental hero Chuck in the way that he is both thrilled and overwhelmed by his new abilities, as well as the responsibilities that accompany them. From his exaggerated “grown up voice” when speaking to other adults to his sharp delivery of teen insults, Levi is having an absolute blast with Shazam and the fun gives an energy that permeates even through the slower periods of the film. Opposite a stoic Mark Strong or an excitable Grazer, Levi brings out the best by channeling the insecurity of an adolescent equally as well as their bravado.

Shazam! hits all the right notes for a family comedy that just happens to be centered on superheroes. There’s a heartwarming message throughout that focuses on the importance of family being what you make it, strengthening the story and providing a line to hang everything from the villain’s motives to the true power of our hero.

Rather than a movie that you see simply to check the box before moving onto the next event in a comic universe, Shazam! manages the rare modern feat of being a standalone superhero flick with serious rewatchability, and deserves a warm and resounding welcome into the DCEU family.