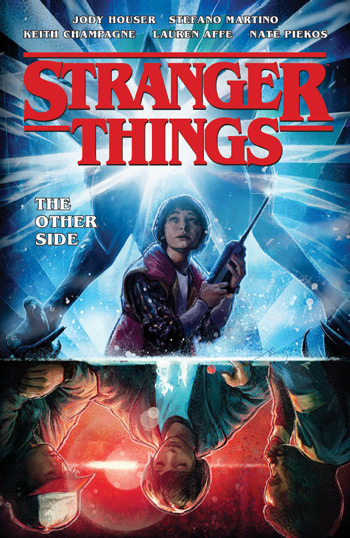 In a perfect world, comics based on television or movie properties serve to expand the world building that the other mediums and platforms started. Whether it is giving fans of Buffy the Vampire Slayer another season via the printed page or extending the adventures of Ash and his boomstick, comics based on previously-created properties can both placate the fan base and create new admires by augmenting the fictional universe.

If done correctly, TV-to-comic (or film-to-comic) adaptations can add depth to the characters and the world they inhabit while creating new fans of the new medium.

But only if done correctly.

That said, the gang of Netflix’s Stranger Things take their retro act on the road as a limited-edition run for Dark Horse Comics now available in a trade paperback collection.

The pages follow the exploits of Will Byers, the focus point of the first season as the missing boy whose friends and family refuse to give up on the mystery of his disappearance.

On the show, Will is the catalyst that pushes the characters and the events. The people who care most about him refuse to accept his “death,” looking to otherworldly events and actions as the true reason behind his vanishing. As the show progresses, it is discovered that Will was abducted to an alternate dimension known as the Upside Down.

Like his home but not, the Upside Down is a dark reflection of reality filled with dangers galore and horrible beasties controlled by the Mind Flayer.

Despite being a main character on the show, very little of Will is present in the series. Although mentioned in every episode and very much on the mind of every character, Will himself is little more than a MacGuffin for the other characters on the show.

In the Stranger Things comic, Will is given a opportunity to shine as the exact nature of his whereabouts are explained in rich detail to the reader, following the 12-year-old as he attempts to navigate the horrors of the Upside Down.

Set between the actions and scenes of the Netflix show, this unique look takes the opportunity to expand the realm of the Demogorgons. The comic answers many questions left open by the series while attempting to build on the mythos. How is Will able to communicate with this mother? Did Will run into Barb? What does Joyce’s Ouija wall look like from the other side? How does it work in the Upside Down?

As the story progress, Will applies all he has learned from his friends, his Dungeons & Dragons outings and advice from his mother in an effort to survive.

The comic does a decent job intertwining itself with the events of the show, from Will’s doomed bike ride to meeting Eleven. However, it is doubtful that the comic will garner any new fans. The book is strictly for superfans, as casual comic readers might find the storyline confusing and the events dull without a working knowledge of the show’s plotline to drive the story. This is simply backstory for the hit show, not a stand-alone book by any means.

The art style of the book does the job, but lends nothing to story development. Although given the opportunity to explore the Upside Down and give it a unique, fun comic-book flair, the art instead rests on the recognizable. In an attempt to stay true to the show, the pencil and inking stays firmly within the box, thus lacking any real panache. But while the sketchings appear to be little more than a static animatic of the show, it does allow fans to quickly recognize the cast.

In the end, the comic will appeal folks who already love Stranger Things and are looking for a deep dig into the show’s mythology. But unlike other adaptations that have successfully navigated their tales from screen to page, the world-building is limited to those who already know the ins and outs of Hawkins, Indiana.