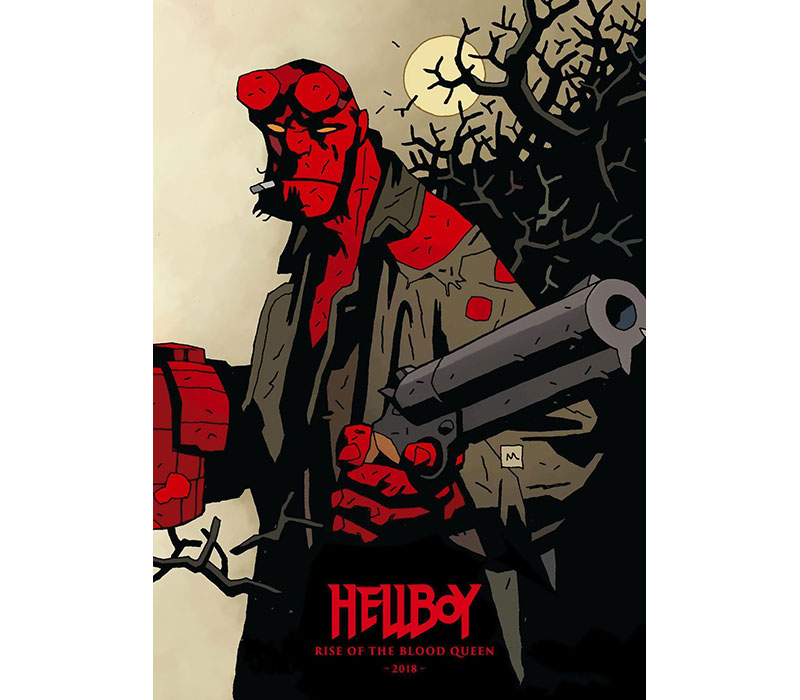 Did you know we’re a week away from a new Hellboy movie?

I sure as hell forgot, until I was inundated with a million TV spots for it on the Paramount Network livestream app. Every commercial break for Bar Rescue, I’m getting the Red Right Hand.

Why oh why are we getting a new Hellboy movie?!?

At this point, you must be thinking I’m here to hate. But look, I’m a Hellboy fan. I’ve read some of the comics. I think the design is cool.

I’ve liked Mignola’s work for decades now, going back to Cosmic Odyssey, those covers for Batman: A Death in the Family, and Batman: Gotham by Gaslight. When an exhibit of his work came to the Society of Illustrators in New York, I hopped the train and took it in. So. Much. Ink. It’s astounding to see that much ink spilled on the live Bristol boards staring you right in the face.

You don’t know how happy late-90s me was when DC and Dark Horse published a limited series teaming up Batman, Starman and Hellboy. It was fun, guys.

As for the movies, I saw both of them in the theater, and had a good time. I bought the action figures, because they were dope! I made him fight this giant Malebogia figure my brother got me one Christmas, and sometimes he hangs out with Etrigan.

I even own a Hellboy T-shirt that’s nearly 20 years old! I wore it the night I met my wife for the first time, and I’m never getting rid of it.

And, despite all of that fandom, I’m still asking: Why are we getting a new Hellboy movie?!?

I know, you’re gonna say, because they can make money.

My counterargument: Will they, though?

The original film, released in 2004, had a production cost of $66 million, and earned $59.6 million domestically. Add in the foreign markets – not the same as now, obviously – and even then the film finished just shy of $100 million. So you could say it was barely profitable.

The sequel Hellboy II: The Golden Army, released in 2008, actually did better, thanks to the international box office really starting to kick in. The film lost money in America, costing $85 million and taking in $75.9 million; but overseas, it covered the production cost. 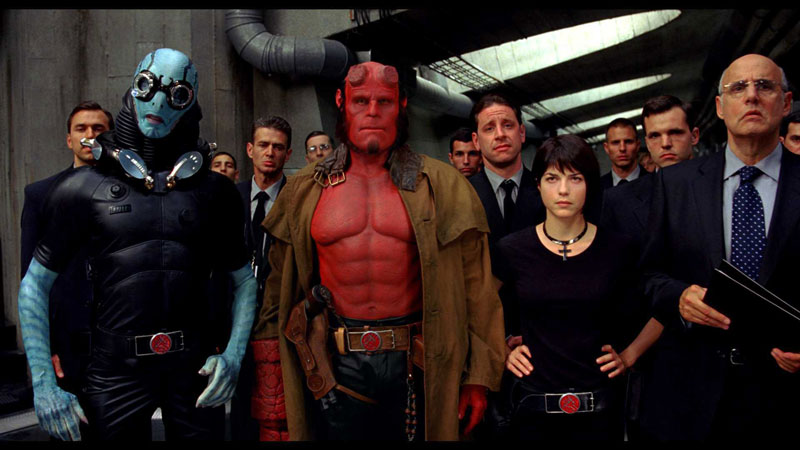 Think about it. Hellboy had four more years to build a brand in America, and its box office still fell about $10 million short of the budget just like last time. I’m sure being released just a week before The Dark Knight didn’t help, either.

Can a decade’s passage of time, in which the superhero movie became Hollywood’s new blockbuster machine and nerdcore sold out, help Hellboy gain more ground at the theater and the Redbox/Netflix afterlife?

I have my doubts. I’m sure Lionsgate is hoping to ride that Deadpool wave of R-rated comic book movies. (Did people forget the Kick-Ass movies happened? I mean, you definitely should forget the second one.)

The thing is, though, from Ryan Reynolds’ first one-liner, Deadpool showed that it was fun. Also, it starred erstwhile Hollywood A-lister Ryan Reynolds achieving his final form by marrying his Gym Jones physique to the smirky, sophomoric comedy a generation of key-demo fanboys grew up on with the Van Wilder movies.

David Harbour is not that.

The only other reason I can think of for why this new Hellboy happened is that Mike Mignola wanted another crack at “getting it right” on screen.

Mignola, the story goes, was working on getting Hellboy III going around 2014. But then the studio refused to give Guillermo del Toro full creative control as with the first two films, and star Ron Perlman walked.

Eleven years after The Golden Army, we’re getting the bones of that aborted sequel as a reboot of the franchise, with R-rated promises of it being darker and more gory and all. Woo.

And the new Hellboy makeup? Those BPRD devotees surely went nuts over the demonic muscles and more comic-accurate head sculpt. 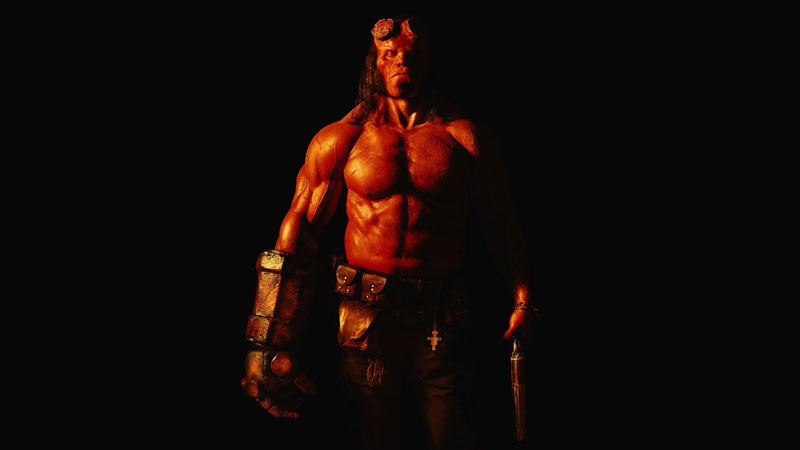 You can hear them. “Oooh, it looks just like the comic.”

That also extends to the monsters, right? Now it’s gotta be even easier to just draw in all the terrifying visions Mignola populated his grand run of comics with.

The trailer drops – red band, natch. Hellboy drops an F-bomb. He fights a lot of monsters. I mean, a lot of CG monsters, with CG blood splatter and limbs sliced off.

Oh, and there’s Ian McShane doing his hard-nosed, accented, DGAF badassery. (Shit, Deadwood has been off the air since 2006, and they’re not gonna stop until we get that crummy season four, are they?)

My nerds, I thought we were past “looks like the comic” as the bar for whether one of these movies will be good? When the whole film industry is fan service, none of it is, right? 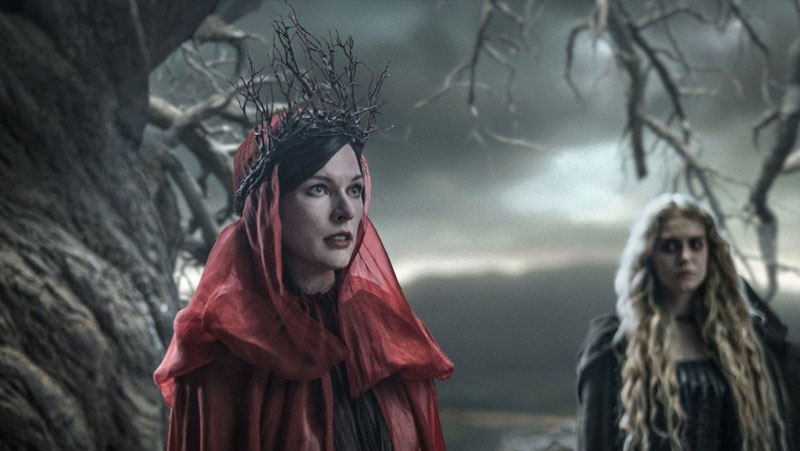 Meanwhile, I’ve gotta read in the geek trades about how this new Hellboy can’t have sex with humans, but Nimue isn’t human so it’s an added level of temptation for our man. As if I wanted to hear about Hellboy’s sex life?

Am I supposed to see all this and think, “siiiiiiick”?

I see all of this and just feel tired and unmoved. Except for the prospect of Thomas Haden Church playing Lobster Johnson, the hard-hitting vigilante who kills mobsters and burns a lobster claw symbol into their foreheads with the palm of his gloved hand.

Of course, this new Hellboy could surprise me by being good despite the fact that I don’t care to have more of it. Like when we got a new Mystery Science Theater 3000; I went in expecting it to be awful and unnecessary, and instead it was really fun. 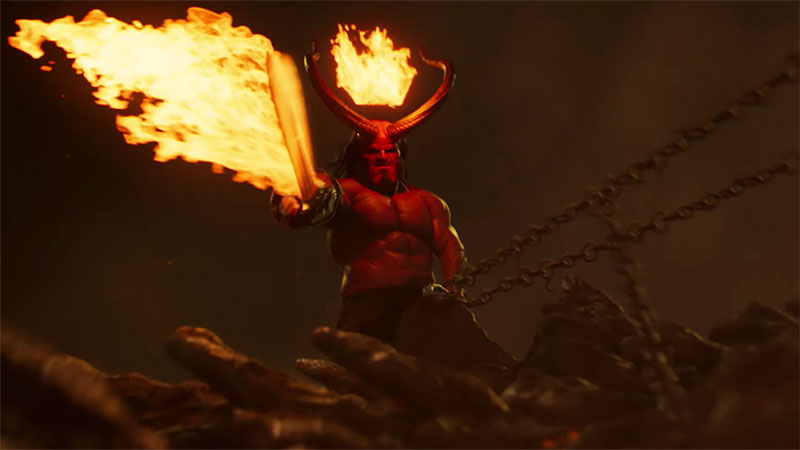 I’m just not putting my money on that. This new movie doesn’t seem fun, no matter how much “Smoke On The Water” you throw at me.

After all, when was the last time Milla Jovovich was in a good movie?

We did get at least one good thing out of this new Hellboy so far. We found out Ed Skrein has some amount of personal decency, or at least knows to get out when the block’s too hot.

The white English actor signed on to play BPRD shapeshifter Ben Daimio, a character of Japanese heritage, in the film. After the news was met with furor over whitewashing, Skrein withdrew from the role, citing that he didn’t want to contribute to the exclusion of Asian actors by taking a role specifically calling for them.

“It is clear that representing this character in a culturally accurate way holds significance for people, and that to neglect this responsibility would continue a worrying tendency to obscure ethnic minority stories and voices in the Arts,” he said in a statement in August 2017.

David Harbour, our new Hellboy, backed Skrein’s decision, saying on Twitter that “an injustice was done and will be corrected.” Daniel Dae Kim later was cast in the role. Dope. 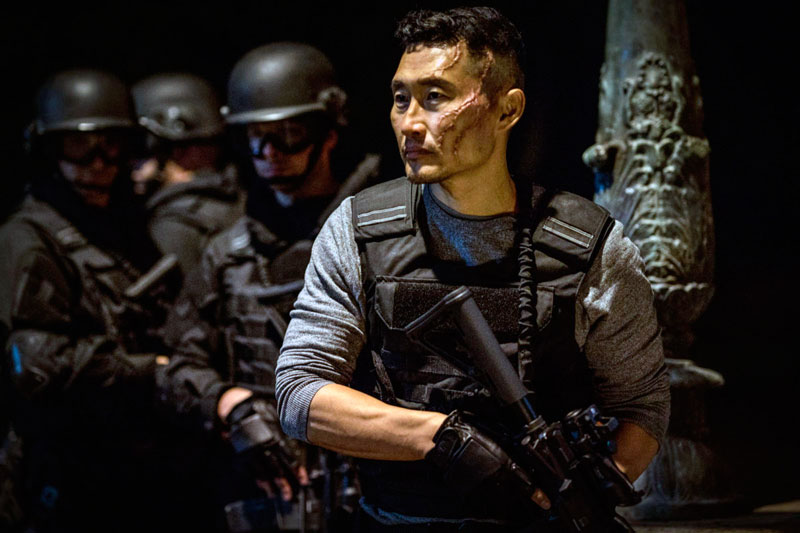 Now that’s a bit of getting it right that I can get behind, even if the movie itself ends up being trash.