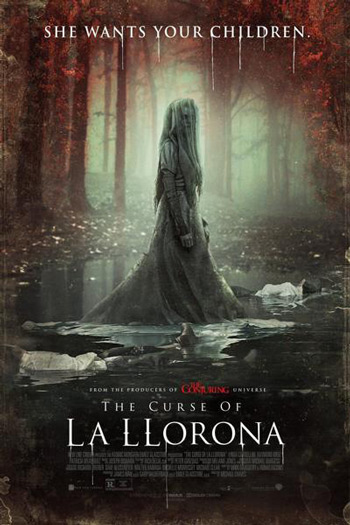 Horror is perhaps the one genre most closely linked with culture. Each ethnic group, nationality, and even subculture has its own boogeymen and things that go bump in the night. Conversely, these terrors are universal in that the fears they are based in are ubiquitous, whether it’s a fear of the dark or anxieties about what the afterlife entails.  To that end, The Conjuring cinematic universe has largely rooted itself in traditionally European/western lore, ranging from old fashioned poltergeists to demonic nuns. If there was ever a long running horror franchise begging for a little cultural flavor, it was this one.

It’s for that reason that the latest tangential installment in this franchise, The Curse of La Llorona, seems so averse to it’s roots in Mexican culture, instead opting to present a traditional American ghost story with only vague aspirations of cultural reverence.

The film is centered around Anna (Linda Cardellini), a social worker and single mother living in 1970s Los Angeles with her two kids. When the children in one of her recent cases wind up drowned and the grieving mother accuses her of exposing the children to “La Llorana”, Anna begins to suspect something else is afoot. Her fears are only exacerbated when La Llorana attaches herself to her own kids and begins to terrorize them. Calling upon an ex-priest (Raymond Cruz), Anna confronts the vengeful spirit in a fight for her family.

Right off the bat, I was impressed by the film’s decision to set the opening scene in 17th century Mexico to give us a brief origin for the titular specter. The bright lighting and beautiful location juxtaposed against the horrific violence that we’re immediately thrown into are jarring and lead you into believing you’re about to watch something a lot more idiosyncratic. Unfortunately, that’s just so the film can suddenly jump cut to the title card and then transition to our actual story, which is introduced to us with a poorly chosen needle drop of the theme from Superfly of all things. Because it’s the 1970s…I guess?

Based on that music cue, you’d think the time period would be important, yet it’s really isn’t. Much of this movie could be set in present day and it wouldn’t change anything, which begs the question of why it isn’t set in Mexico in the first place. It’s unfair to critique a movie for what it isn’t rather than what it is, yet the Los Angeles setting isn’t very interesting at all. It’s even more frustrating when the film teases fantastically eerie imagery based in Mexican cultural iconography, but the film is so insistent on returning back to the same boring suburban house for the bulk of the narrative. The lack of location variety is undoubtedly due to a lower budget, but it gives the film an unavoidable aesthetic of cheapness.

Despite being what could be boiled down to being a Mexican re-skin of Valak from The Nun, La Llorona does admittedly have a pretty striking design and much of the best sequences in the film are derived from her just standing eerily, boosted by great use of shadow and sound work. Unfortunately, like many Conjuring universe films, the film sabotages itself by leaning too heavily on tediously drawn out “suspense” sequences that predictably end in an uninspired jump scare.

There’s a distinct lack of structure and pacing to the film, which makes it feel very stop and start. The scares never really escalate past non-sequitur jump scares for most of the film, yet suddenly almost 40 minutes of the film is dedicated toward the final showdown/climax. It’s a sudden shift yet doesn’t really feel earned when it felt so meandering for the first and most of the second act. In its rush to tick of the standard exorcism/demonic showdown tropes, it left anything interesting that could have been done with its premise back in the drawing room.

The Curse of La Llorona isn’t a very good movie, even within the confines of this highly hit or miss franchise. Despite its flaws, The Nun was able to lean into its Euro-horror roots to deliver something that, if not narratively, at least visually felt fresh. This film is just so damn reluctant to dig deeper into what it could be so the end result is a frustrating mess. It’s probably not the worst film in the franchise, but it’s easily the biggest waste of great potential.