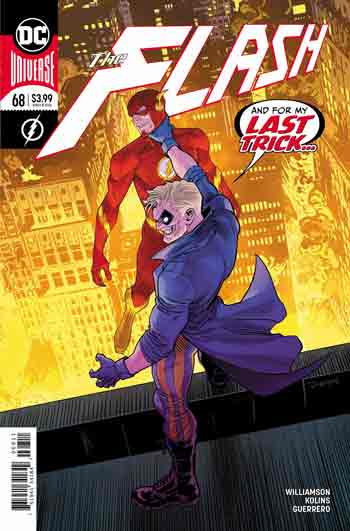 This comic really has turned around in the last few months. It’s been fun and exciting and I’ve been loving it.

This latest storyline has been intriguing and some of Williamson’s best writing on the series; it’s as enjoyable as can be.

We see the Trickster in the opening scene torturing a guy from the future dressed like a version of Commander Cold. He is trying to figure out if “The Trickster” is household name in the future.

We then see him and his young protege go to the Iron Heights Penitentiary where they have a bunch of villains there being used as slaves. This was a super intriguing moment and the tension was palpable.

We then see Barry Allen go through a tube-like thing. He comes through and suddenly, he’s “happy.” All of Central City is similarly happy like him.

Are they all under some sort of mind control?

Is Barry really under their control?

Or is it all part of something that is much, much worse.

Luckily, the answers come fast and furious like you wouldn’t believe!

The good news is that Barry seems to have avoided from being mind controlled. Now, he has to get to the bottom of whatever is happening. He puts his Flash costume on and gets to work. And things get moving even more quickly from here!

Barry frees Commander Cold! He goes after the Trickster’s that are out there. The main Trickster is ready for him however! He turns the people of Central City against each other! And then, the cliffhanger moment happens. And it’s absolutely incredible!

I was never a huge fan of Scott Kolins until now. He makes a great collaborator for Williamson though. The two creators bring the best out of it other and it shows. This a great book that is seemingly getting better with each issue.