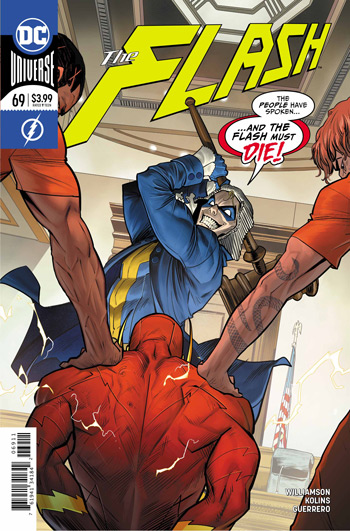 This book has been great!

Joshua Williamson has been knocking it out of the park on this title in recent months and I’ve been enjoying it immensely. This issue is another issue where Barry is going up against the Trickster and its absolutely wonderful!

The opening sequence has the Trickster saying “Tick Tock” and counting down towards the end of Central City. The Flash is nowhere to be found.  Things are falling apart! Villains are everywhere! Can anyone stop the Trickster?

We then see Barry horrified that his legs were cut off! It’s a grotesque image we see here drawn by Kolins, who does excellent work in this issue.

What is Barry going to do?

Barry then has a conversation with Commander Cold about everything. Can Barry snap out of it? Well, he eventually does. And it’s a glorious scene we get to witness.

The Flash is ready to take on down the Trickster. They face off! It’s one hell of a battle! And it ends in a glorious fashion! Williamson pulls out all of the stops here and it shows.

Barry goes back to work at the lab. Everything seems normal. That is, until a villain named Steadfast shows up. Then, he blasts Barry with eye beams, saying that Barry has to remember something from his past. It’s a pretty fantastic scene.

It then leads us into what’s going to happen next issue. It appears the next storyline is called “The Flash: Year One.” At this point, I was as excited as could be. This is a great issue with the promise of more great things to come. You really can’t ask for more than that.