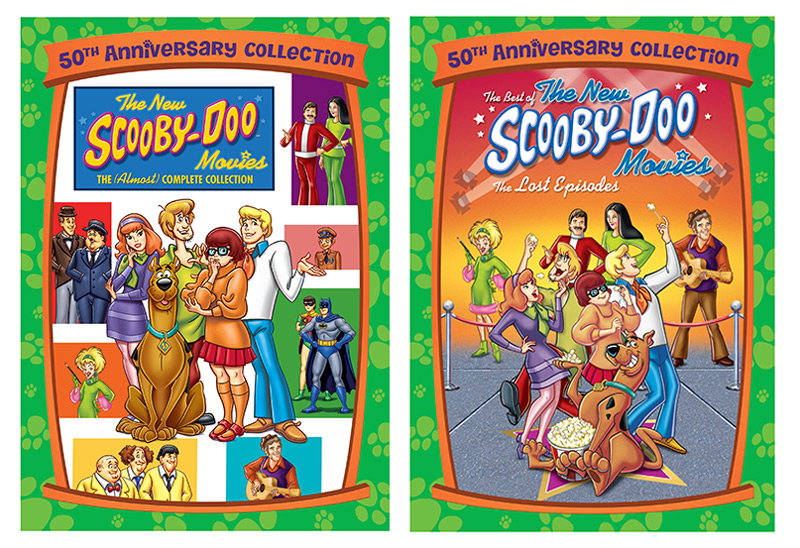 Released just in time for Scooby-Doo’s 50th anniversary, these brand-new collections feature episodes with legendary stars such as Don Knotts, Cass Elliot, Davy Jones, Harlem Globetrotters, Batman and Robin, and many more! The New Scooby-Doo Movies: The (Almost) Complete Collection will retail for $59.99 SRP/Blu-ray and $54.97 SRP/DVD. The Best of the New Scooby-Doo Movies: The Lost Episodes will retail for $29.98 SRP.

Also in time for Scooby-Doo’s golden anniversary, WBHE is set to release Best of Warner Bros. 50 Cartoon Collection – Scooby-Doo. Available on July 30, 2019, this DVD will feature a collection of the very best episodes from every Scooby-Doo series, which have been specially selected for this brand-new compilation.

For the first time ever, nearly all episodes from The New Scooby-Doo Movies, the Scooby-Doo series featuring celebrity guests, are available to own in one collection! It’s star-studded hijinks on The New Scooby-Doo Movies: The (Almost) Complete Collection, which includes 23 highly-entertaining episodes available on DVD/Blu-ray™. That loveable Great Dane and the Mystery Inc. gang encounter some of pop culture’s most legendary names, including Jonathan Winters, Dick Van Dyke, The Three Stooges, Cass Elliot of The Mamas & the Papas, Laurel & Hardy and many more, as they embark on their mystery-solving adventures.

The Best of the New Scooby-Doo Movies: The Lost Episodes features eight never-before released episodes that are now available together on DVD for the first time.  Fans of Scooby-Doo can’t get enough of the Mystery Inc. Gang teaming up with stellar celebrity guest stars who help them solve the most intriguing cases. In The Best of the Scooby-Doo Movies: The Lost Episodes, the gang joins forces with heartthrob Davy Jones as well as Josie and the Pussycats. The magical duo of Jeannie and Babu help rescue the gang in an ancient pyramid. Help Scooby-Doo search high and low for all the fun and hijinks with these eight lost episodes.

The Best of the New Scooby-Doo Movies: The Lost Episodes

“Some of the classic Scooby-Doo episodes fans are the fondest of, are the ones that feature celebrity guests. With these brand-new collections, viewers can now own some of the best celebrity-centered Scooby-Doo episodes in the Scooby-Doo catalogue,” said Mary Ellen Thomas, Vice President Family & Animation Marketing. She added, “It’s Scooby-Doo’s 50th anniversary and to mark the occasion, we decided to release some rarer Scooby-Doo content that has never fully been offered before. If you’re nostalgic for some of pop culture’s biggest celebrities, you won’t want to miss these delightful collections.”