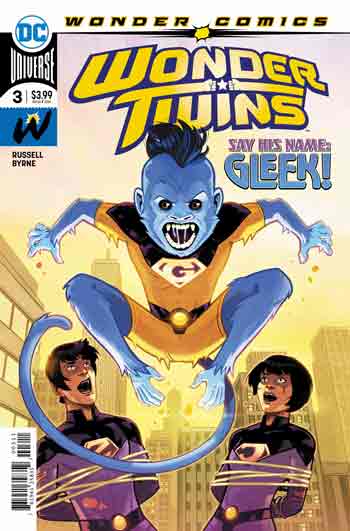 This limited series is one of my favorite books that has appeared this year.

Writer Mark Russell is a genius and he does exemplary work here. Combine that with the amazing artwork of Stephen Byrne and you’ve got one incredible story that you can’t put down.

I honestly can’t get enough of it.

This issue opens with Jayna in class listening to her teacher talk about Sisyphus. Then, class is dismissed and we see Jayna talking to a classmate named Polly Math.

Polly asks Jayna if she would like to work on their school project after school. Jayna says no because she has to work.

Little does Polly know that “work” for Jayna is at the Hall Of Justice!

So, then we cut to the Hall of Justice. Superman is there, and he is commending the Wonder Twins on their first mission. Then, Superman notices that there is a monkey there. Zan comments that it’s not a monkey, but it’s Gleek!

Superman then makes his way over to Jayna who looks very sad.

This is one of my favorite moments of the book so far. Jayna asks Superman what good their last mission actually did. Superman gives an incredible speech and Zan says the coolest thing after listening to it. He says “Kindness is how you save the world.” It may be a super hero comic but Russell really knows how to make a point about life through it. He knows how to work the lens and make a powerful impact with his writing.

From there, we see Lex Luthor up to no good. And that sets off the League of Annoyance. The League decides to attack the Wonder Twins and it’s one hell of a scene. The Twins get captured and it’s up to Gleek to save them. It’s pretty great to be honest.

Russell has fast become one of my favorite writers. His work is excellent here and pointed. And the art by Byrne is fantastic. He knows how to move the story and make it visually appealing and interesting.

This is a great limited series that I hope turns into an ongoing one. It certainly deserves it.