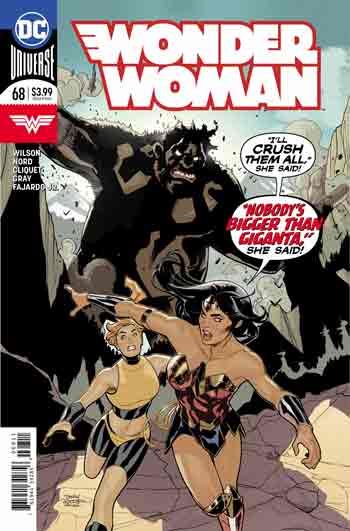 Wonder Woman wraps up its second major story arc from the mind of writer G. Willow Wilson. ‘The Giants War’ ends after three issues as the new status is maintained.

Mt. Olympus and Themyscira have gone missing and Wonder Woman is in the mountains teaming up Brave and the Bold style with the Suicide Squad’s Giganta.

The two heroes take on Giant rock beasts as Giganta chides Diana about being “Fake Happy”. The granite Titans fall with their own versions of the Fastball Special before it is revealed that the giants are there to protect something, they aren’t being big meanies for the heck of it!

They are protecting the same sword from Themyscira that was bestowed upon Maggie at the end of the last issue in an Arthurian manor.

Wonder Woman recognizes this as Antiope’s sword, portending that she must embark on a quest! Though Maggie tries to relinquish the sword to Wonder Woman, she refuses to steer Maggie away from her destiny, whatever that might be.

Giganta returns back to Amanda Waller and Suicide Squad and for the team-up she is rewarded with two years taken off of her sentence (hopefully they take that nasty bomb out of her head!). Maggie and Cadmus leave Eirene and the other refugees behind as Wonder Woman  and Aphrodite lead the charge on this new mission.

This was a great wrap up issue, solid art all around but I am guessing, as is what happens frequently these days, double shipping is crippling the artist ability to ship on time, so DC brings in a house style look-alike (this is not a disparagement, I only wish to see everyone have enough time to meet deadlines). Do we need this book twice a month? I say no if it means we get 10 pages from someone and the rest from someone else. I’ll let it slide if there are two distinct timelines in a book (a flashback and a present time scene) but I would be happy with one great Wonder Woman book a month.

I want to see how the Arthurian Legend and current refugee affairs coincide with each other as Wonder Woman continues to have one foot in history and the other firmly planted in the headlines. Great stuff.