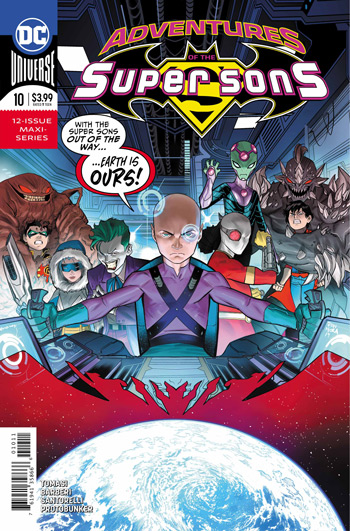 This is a fun title month in and month out. Peter J. Tomasi has written a really excellent series here. Watching Superboy and the Damian Wayne Robin interact has been nothing short of delightful. This is another fine issue in this series.

The opening scene of the book has the two heroes fighting for their lives! It’s an overblown story filled with many villains that is interrupted by two small super-powered children.

It seems like their grandfather is reading them a story.

Then, another older man comes in and says “that’s not how it happened!” These two men are assumed to be an elder Superboy and Robin and the setup is pretty hilarious.

From there, we see Rex Luthor preparing his final endgame!

It seems like nothing will be able to stop him and the Gang! Then, Superboy and Robin show up and go to town fighting them! It leads into a pretty epic battle!

Things just go insane at this point. Jonah Hex (well, a robot version of Hex) even joins the fight and it becomes bonkers.

Superboy eventually comes up against Rex and they have a small battle.

This leads to Rex Luthor shooting wildly and eventually killing the poor innocent Jonah Hex robot. This then leads to a surprise visitor as we find out just who owns that robot. It looks like all hell is about to break loose by the end of the issue.

The story is highly engaging. The art by Barberi perfectly compliments it. Only two issues are left in this series. I can’t wait to savor them both.