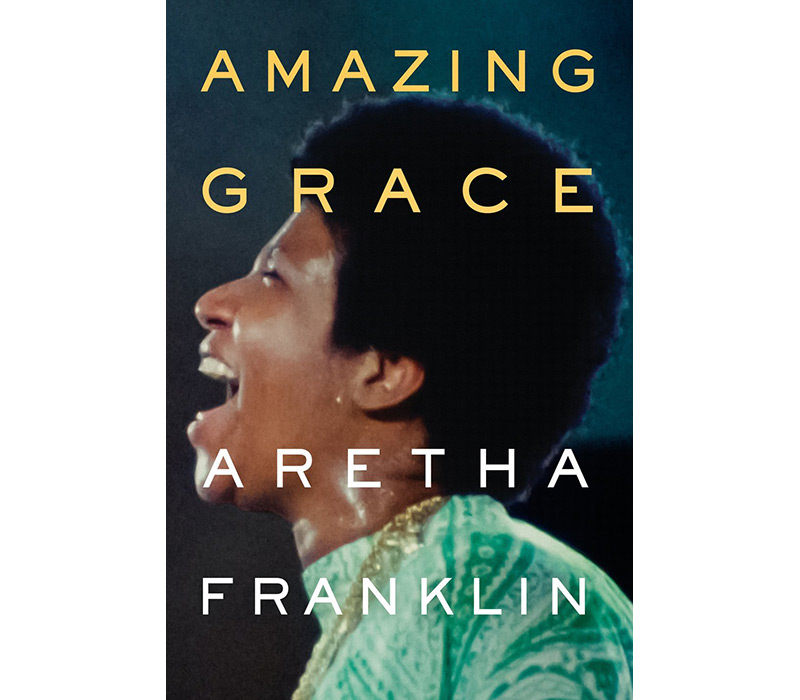 Just, wow. A full-powered, creative-prime Aretha Franklin at age 29 in 1972, singing the gospel of her youth, in this jaw-dropping artifact. It was stunning. Never thought this film would get released, but here it is.

For those who know, it is a huge deal that this documentary is finally out. For the uninitiated, here’s the tale. Aretha Franklin, after recording much of the pop and soul music she’s most known for, returned to gospel in 1972 by recording Amazing Grace, a live album at the New Temple Missionary Baptist Church in the Watts section of Los Angeles. It continues to be the best-selling gospel album of all time.

The two-day recording session was filmed, but director Sydney Pollack neglected to provide “clappers,” the wooden tools editors use to sync the film and music before each take. For nearly 50 years, the Amazing Grace concert film resided only in cans.

Finding a way to sync the sound to the images, and getting the film released, was a holy grail of sorts. When Pollack turned the footage over to music producer Alan Elliott, it took digital technology and years of work to finally sync the sound and image into a releasable film. However, Aretha Franklin herself opposed the film’s release over contractual issues. It sat, again, until her death last year.

I’d read the testimonials from people who had seen Amazing Grace, but now I finally had my chance to see it with my own eyes.

Every time I think about the film, I am blown away for multiple reasons.

It’s great to see all the things I only imagined had happened, and then more!

The Southern California Community Choir, who backed Franklin, dredged up all my own black choir memories. Whether in the black Catholic church of my young childhood, or my times with the Kuumba Singers of Harvard College, those specific experiences so sharply aligned with what I saw in Amazing Grace.

The gathered-step procession down both aisles (and the necessary choreography sessions of such), the matching outfits of silver vests over black shirts and pants. Who’s gonna go off during the solos. Who’s cracking jokes – whether between songs or during them!

Who would sway the hardest, who would and wouldn’t clap. And that those choir members not dancing or clapping have declined to do so, most likely because they know they’re bad at staying on beat, and got shamed so hard by age 12 about it that they don’t dare do such in public ever again.

To see nerves betray themselves on Aretha’s face when her father, the Rev. C.L. Franklin, arrives in the front row with Clara Ward. Or when father Franklin wiped his daughter’s face with a handkerchief as she was singing and playing the piano! 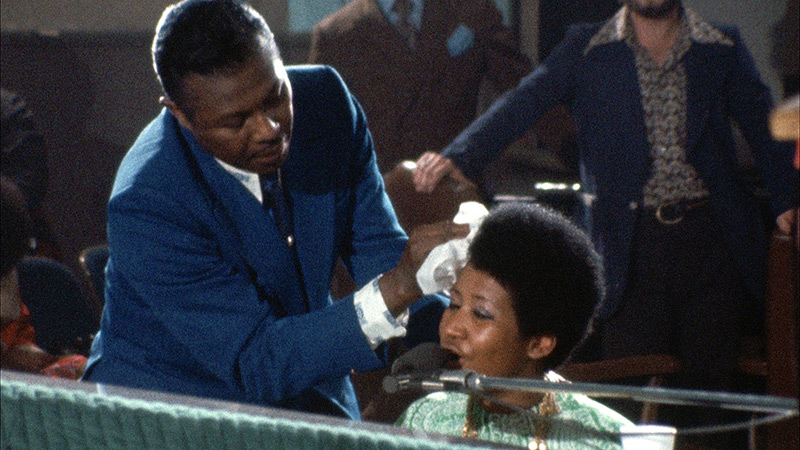 The Rev. James Cleveland, Aretha’s friend since childhood, collapses in a sobbing heap as she sings the title hymn, “Amazing Grace.” And – AND – that Aretha sings 11 whole-ass minutes of that hymn so hard that a woman rises out of her seat and begins a physical confrontation with people in the front row, right in front of Aretha playing.

As someone who works in the TV industry, I drew delight from watching the technical aspects of the documentary that were caught on camera. Look at those cameramen hustling for shots. Director Sydney Pollack, kneeling with his own camera shooting photos and framing shots amid the crowd’s rapture, or frantically pointing out people to get on camera.

What about those gloriously imperfect close-ups of a radiant, glisteningly sweating Aretha thanks to those manual focus sliders? As the camera zoomed in, the focus would go in and out as if the cameras themselves were incapable of capturing all of this brilliance.

We see the tape recorders and tubes and wires of this all-analog world. I saw someone holding out their own tape recorder. Does somebody still have that tape?

I drank in the excitement that hung in the church’s hot air. As he welcomes the audience into the church, Cleveland encourages the people to vamp for the cameras if one comes their way. When did Hollywood, in 1972, ever come to Watts? How often did Hollywood, at that time and for many decades since, care to show black people, black faces, black bodies, in joy, just living their lives?

I could feel the tears well up in my eyes as Aretha sang “Never Grow Old.” For in that moment, as she stirred every soul in that church, and the theater itself became a church, a circle had closed.

Aretha, from 1972, was singing of “a land on the far away strand,” a “beautiful home of the soul built by Jesus on high, where we never shall die,” that “land where we never grow old.” But 47 years later, I sat in that theater having never seen Aretha young; to me she was always older and then old, until she embraced that final mystery in death not even a year ago.

When Aretha Franklin died on August 16, 2018, I was struck by how much her death affected me. It wasn’t as if I was some giant Aretha fan. I knew some of her work, but not all of it. As much music as my father owned, I don’t remember a single Aretha album in that collection. (No James Brown, either.) And in my lifetime, she remained highly active and respected, though no longer at her full creative powers that made her a legend.

But the past few years, I kept digging more into her body of work, as the lifetime honors continued to accrue. And then in 2015 she set the Kennedy Center on fire singing “(You Make Me Feel Like) A Natural Woman” in a tribute to Carole King, merging the sensual and spiritual, the body and soul, at that piano in her fur coat and pearls. The nation’s first black president shed tears listening to this woman who gave so much to the fight for black people’s rights, who sang “My Country ’Tis of Thee” to usher in his time in the White House.

When Aretha Frankin died, I felt something leave my black soul. She was emblematic of American blackness and all its heritage. She’s in the foundations of that house, in the floorboards and bricks, walls and windows and roof. It hurt so much. It hurts now to think about it.

As my friend, writer Denise Clay, wrote on my Facebook page the day Aretha died, it hurt so much to lose Aretha because “she was one of the voices who taught us that it was okay to be us. To be young, gifted and Black. To demand our respect. She was that aunt who sent you back outside to take on the bullies after she taught you how to give a two-piece like a pro.”

Watching Amazing Grace, I thought of the many, many people assembled who have joined Aretha in the great beyond, if there is such a place. Her father, the Rev. C.L. Franklin, sitting there in the front row, lived another 12 years until he died in 1984. The Rev. James Cleveland, himself just 41 years old on those January nights in 1972, died in 1991. Clara Ward, another legend of gospel music, died just a year after that recording session, at age 49. Sydney Pollack, who directed the film footage, made it to 2008, as did the album’s producer, Jerry Wexler.

The best of church, the best of gospel, creates a space in which those very mortal bits of our being – mind, body and spirit – grasp at and even commune with eternity, with the everlasting beyond life and death. Aretha, and many, many more of those who assembled at the New Temple Missionary Baptist Church those two nights have passed into the eternity of death. 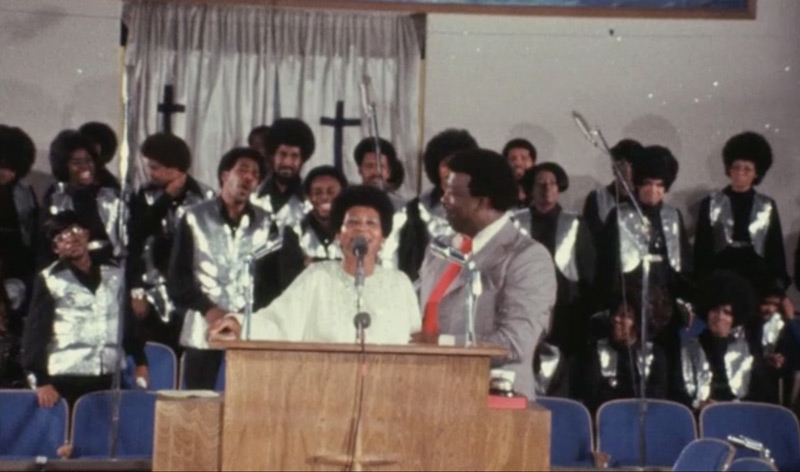 How special it is that their faces and voices are etched into the record that is this film.

Here they may live as long as women and men draw breath.