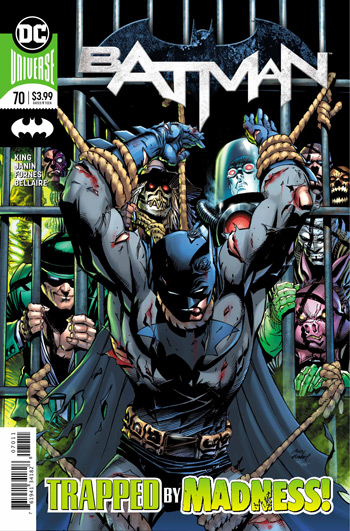 The issue begins with Batman ripping himself out of the machine that he has been hooked up to. The “Knightmares” storyline is over and King now has Batman angry and ready to go after Bane. But he’s got his work cut out for him as Bane’s plan is pretty epic.

When Batman gets out, the first person he sees is the Riddler.

The Riddler asks him a riddle of course. The riddle is “why did the director fire the Watchman?”

Well, Batman answers the question, but not before kneeing the Riddler right in the face!

It’s an excellent and rousing start to this fantastic issue!

Batman is in Arkham Asylum and he’s pretty heated. He’s taking out every villain thrown at him and taunting Bane.

He is basically goading Bane out of hiding. He tells Bane his plan was foolish. He says that Batman himself, is indeed the nightmare. It’s just plain awesome.

The page with Batman confronting Mr. Freeze is pretty damn great. The part however where Batman confronts the Scarecrow is just unbelievable. But just when you think it can’t get any better, Batman comes up against Two-Face. And their confrontation and talk is truly one for he ages. To say more is to spoil the fun and I won’t do that!

King is doing some of his finest writing on this title and it’s just glorious. The art is great, too.

I love Janin but Fornes is fast becoming one of my favorite comic book artists. I love his line work and storytelling and he is just great.

This run on Batman is getting better and better. The story and the drama just builds with each installment and it’s just incredibly well done. I can’t wait for the next issue. Heck, I can’t wait to read the whole run again!