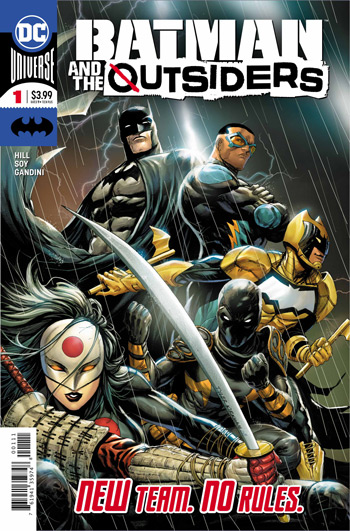 “I don’t trust Batman. But that doesn’t matter. What does matter – is us trusting each other. Because I have a feeling we’re on our own.”

When you jump into a new series called Batman and the Outsiders, you expect big things. After all these are some pretty big shoes to fill.

Well, writer Bryan Hill and artist Dexter Soy jump in with both feet, setting up a story that promises plenty of action and intrigue. We’ll just hope that ramps up into the sort of colorful superhero team action this book deserves to be.

It’s certainly got promise, I’ll give it that.

Right now, though, this book has a bit of an identity problem.

Ever since the team was re-introduced to current DC continuity back in Scott Snyder’s Dark Knights: Metal crossover event, and Black Lightning bagged his own CW series last year, fans have been waiting for this reboot.

But nothing seemed to come of that, not until Black Lightning showed up in the pages of Detective Comics to help the Batman family to defeat the nefarious villain Karma. That led to the set-up for this new team. One that would place Batman proteges Duke Thomas, aka Signal, and Casandra Cain, once Batgirl, now Orphan, under Black Lightning’s tutelage.

Which is kind of a weak lead-in to a team with a legacy as strong as this one. More like the Left-Overs. Or, as Black Lightning quips sardonically, the Outcasts.

Which frankly, and unfortunately, is a weird role for Jefferson Pierce to be playing.

Bryan Hill seems keenly aware of this himself, indeed much of this issue seems to be occupied with Jefferson coming to terms with what Batman is asking of him. While having some dramatic tension baked into a new storyline has some merit, this particular tension is an odd dichotomy.

On the one hand, Batman and Lightning are clearly familiar with one another. Jefferson is on a first name basis with Bruce Wayne, an honor he shares with Tatsu Yamashiro, known to us as Katana, whose presence on the team is certainly welcome. So, apparently, this team does indeed have some real history behind it, and not just of a prior DC continuity.

But as he is found of making clear, Jefferson Pierce also does not appear to particularly trust Batman. And clearly, he resents being delegated to be a stand-in father figure for Batman’s extended brood of sidekicks.

Which isn’t exactly unreasonable of him, given how easily Batman steps in to take charge when it suits him. But again, that just highlights the strangeness of the set-up. After all the title of this book is Batman and the Outsiders.

You don’t expect that sobriquet to be the main dynamic with Batman himself.

All of which makes the whole brave and bold tone of the classic team a little hard to come by just yet.

The artistic talent makes up for some of that. Dexter Soy has an eye for layouts, and a genuinely excellent cinematic perspective that lends a lot of visual strength to this book. One that promises to give us some pretty glorious action sequences, I think – once this book kicks into gear. What little we get this issue certainly looks good.

In addition, colorist Veronica Gandini has chops of her own, and she and Soy work well together. The blend of ink and digital coloring on this book is exceptional, and absolutely adds to the appeal of the book.

Which is good. Because this book deserves to be colorful.

And, I think, Bryan Hill is no wallflower for action sequences himself. That’s clear already, though we haven’t seen too much of it in this first issue.

Gotta get things set up, got to get it all in motion. You can almost feel Hill’s own impatience with the clunkiness of that. Hopefully now, and he can get on with the show.

Because something tells me he has a show to give us.

A book like The Outsiders, you don’t want it to simply be another Gotham City Family Knights-on-the-town. There was some concern of that, given the lead-in and the line-up our creative team was handed.

But if the last few pages of our story this month are any indication, playing small is nothing Bryan Hill has in mind.

One with a lot of promise.