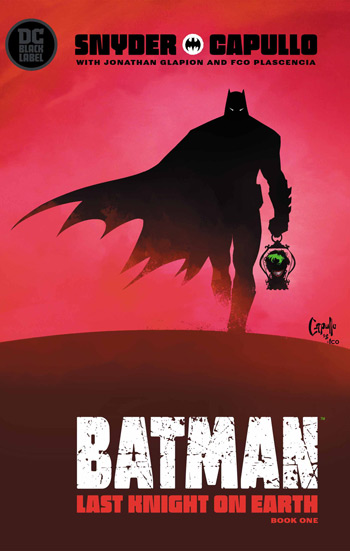 This is one book that I’ve been pining for and have been wanting to read for a very long time. I love the Batman run by Scott Snyder and Greg Capullo so much. It was great and it still holds up. This book is supposed to be their last word on the character as a creative team. And let me just say that this book did not disappoint in the least.

The opening pages of this book are fantastically nightmarish. Batman is driving in the Batmobile through Gotham. He arrives at Crime Alley. There is a boy holding an umbrella while on his knees. Batman approaches the boy. Then, we see that the boy is a version of Bruce Wayne of when he was a child. A gun comes out of nowhere. Something happens that suggests that Batman gets shot.

And that’s then the story kicks into high gear.

Bruce wakes up in Arkham Asylum in a hospital bed. He is all bandaged up.  The Joker is there dressed as a doctor. What does the Joker want? And more importantly, what has he done?

The Joker talks to Bruce and the whole scene is clearly insane.

Then, Alfred comes in and the whole story teeters on pure madness. Alfred reveals that Bruce was the one who killed his own parents in Crime Alley. This angers Bruce and I have to admit to being thrown completely off by this.

But it’s so well done I just went with it. It’s some great stuff.

Snyder and Capullo had a run on Batman that never went where I was expecting it to. They follow that trend and do the same thing here. Alfred and the Joker try to convince Bruce that he is crazy and that the “Batman costume” was what they used when they needed to lock him up in a straitjacket. It’s some powerful comic book storytelling that the pair achieve here.

There is a revelation later in the issue that shows Batman where he really is. And it’s something we have never seen before. Yes, it is the weird future we have seen in the advertisements. It also is much, much more than that.
Snyder and Capullo just knock it out of the park, right out of the gate. This is the pair at their best. I’m sad it’s only three issues, but I’m going to savor them while we have them. This is excellent.