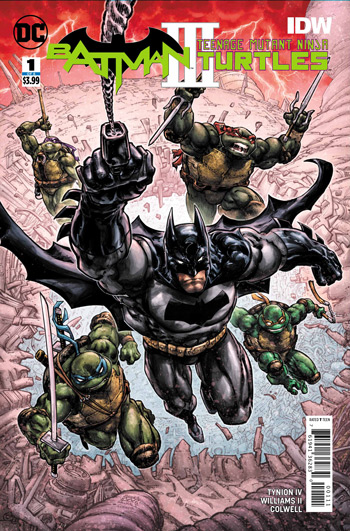 If you haven’t read the first two volumes, don’t let that stop you picking up issue #1. Tynion gives you all you need to understand in the first few pages.

Gardening back to the days of the shared Amalgam Comics imprint from Marvel and DC, we are introduced to a world where Batman is on patrol with four Robin-based sidekicks who also happen to be Ninja Turtles.

Shredder and Joker are merged into one, as are Splinter and Alfred, and Casey Jones is helping Jim Gordon on his police force.

The mashups don’t stop there, with Rocksteady and Be-Bop played by Killer Croc and Clayface and Harley is heading up Foot Clan doppelgängers, The Smile Clan.

Our Batcave is also home to the Turtles and a Bruce that likes pizza and takes time to meditate.

Shredder/Joker aka Laughing Man is the head of the Smile Clan, but in this crisis, the main villain of the story is one that will make DC and Turtleheads geek out hard. Anti-Monitor has been merged with Krang, the chaotic leader and puppet master of Krang’s Multiverse. Kudos for Tynion’s callback for the title of this volume, Crisis in a Half Shell.

Freddie Williams’ painterly style and the character redesigns are fun, especially The turtles and Smile Man. Eastman does a variant cover which of course is awesome as we get to see his Batman, but also in the inter dimensional swap, an original black and white Raphael comes popping through.

Splinter in a tuxedo giving a meditative Bruce Wayne some sage fatherly advice is also a highlight for me, a rat butler raising five boys to do what is right.

With an inte- dimensional time stone and Krang ready to unleash his Ultra-Technodrome onto New Earth Prime, there is plenty of story left to tell in the remaining five issues and we look forward to seeing Batman emerge from the next sewer grate with a slice of pizza in his hand!