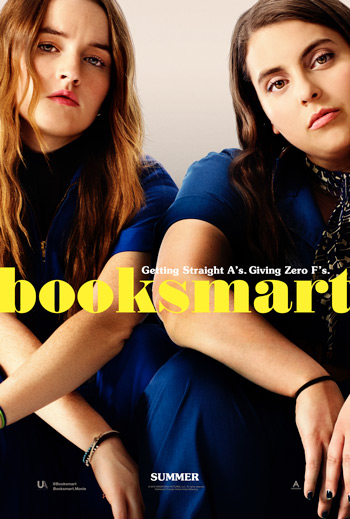 As of this writing, Booksmart, Olivia Wilde’s directorial debut (starring Jonah Hill’s sister, the luminous Beanie Feldstein) is sporting an impressive 100% “fresh” score on Rotten Tomatoes, due in part to its empowering girl power message (both onscreen and off).  But does that mean the much-lauded teen comedy is actually…good?

Well, let’s just say that, much like Feldstein’s character, Molly (a perfectionist control freak who makes Election‘s Tracy Flick seem like a slacker), Booksmart definitely gets an A for effort.

Oh, so much effort.

Fortunately, there’s just enough charm left over to make the movie worth a look thanks in large part to a winning performance by Feldstein (best known as Saoirse Ronan’s loyal pal in Greta Gerwig’s far superior coming-of-age dramedy, Ladybird).

Together with her brainy, sullen friend, Amy (Kaitlyn Dever), Molly realizes (in one of the film’s funnier bits) that the hard-partying classmates the pair of goody-two-shoes spent their adolescence looking down on actually got into colleges just as prestigious as theirs while simultaneously acquiring the social intelligence and sexual experience the two of them sorely lack.

Thus, to catch up with her peers, Molly drags Amy through a wild night of graduation parties, determined to squeeze four years of debauchery into 24 hours — which, for the most part, is just as exhausting as it sounds (save for some decent one-liners, sight gags, and the occasional quiet moments of chemistry between Feldstein and Dever when Wilde lays off the throttle long enough to let their characters behave like actual flesh-and-blood human beings.