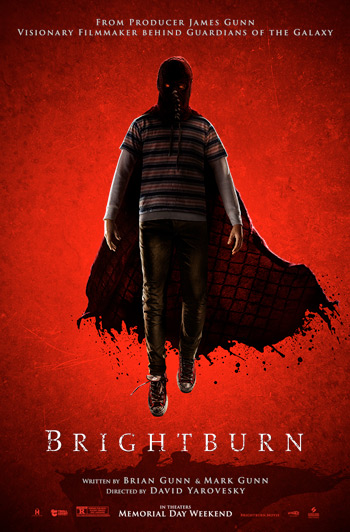 In the kingdom of Hollywood, premise is king and the pitch is the queen.

Come up with a nifty hook for a story, lay it on an unsuspecting producer or studio executive with enough charm, and before you know it, you’re shooting a movie, whether the actual story your selling them can actually cut the mustard be damned.

That’s what it feels like we have in the latest offering from producer James Gunn: Brightburn. Written by Mark and Brian Gunn, the film’s premise is simple: what if Superman crashed on Earth as baby, but grew up to be a violent psychopath?

However, logline is where Brightburn peaks, as the actual film is far from as exciting as it’s premise.

The film follows the Breyers (Elizabeth Banks, David Denman), a young couple trying to conceive a child, but failing. When an infant crashes in their backyard late one night, they think that it’s the answer to their prayers. However, the child (Jackson A. Dunn) begins to show darker patterns of behavior as he gets older and the blood begins to spill around town…

For about the first 20 minutes, Brightburn plays like a more palatable version of the first act of Man of Steel. The slightly dulled color palette and less saccharine portrayal of Kansas feel grounded, yet still welcoming. Much of this is bolstered by great performances by Banks and Denman, playing the quirky dorks who somehow stumbled into being parents, but have somehow managed to wing it for 12 years. The kid, Brandon, isn’t too bad himself, striking a balance between aloof and vulnerable that’s realistic.

However, whether it’s the Gunns’ script or David Yarovesky’s direction, the film takes a jarring shift in tone, and the audience and characters unfortunately can’t keep up. Brandon takes a 180 from being a normal kid to giving Macauly Culkin from The Good Son a run for his money. There’s no consistency to the character. One scene he’s all smiles and the next he’s channeling his inner Damian Thorn. Narrative is thrown to the wayside as we sprint from one kill scene to the next without any real sense of why we should care for anyone involved.

It’s in these latter two acts that the film morphs into a superhero slasher movie. The kind of joked about “teleporting” that the likes of Jason Vorhees and Michael Meyers one called their own has been turned up to 11 by Brandon. The gore is admittedly very well done and one particularly cringe worthy scene involving a broken jaw might be the most unnerving thing I’ll see all year. Unfortunately, outside of the gore, any attempt at tension or scares Is generated from cheap jump scares, both false and real.

It also doesn’t help that Brandon himself isn’t a very scary villain. When your “monster” is only half your height, it’s hard to take them seriously. Granted, when Yarovesky shoots him lurking in the background using shallow focus and he’s loitering at the edge of the frame, it’s unsettling, though it ultimately just feels cribbed from better slasher fare (i.e. Halloween).

All of this culminates in an ending that feels so flat that it I was left wondering if there was a third act that got left on the cutting room floor. The film never settles into a comfortable pace, as if it’s trying to make way for a better story we’ll be seeing a trailer for in a few years. The credits sequence does seem to hint at a larger narrative that we may be lucky to see, but in many ways, Brightburn feels like the “Part 1” to a yet unmapped finale, leaving the audience with a hollow viewing experience.

Perhaps it says something about the current state of our culture that we’re far more interested in turning Superman evil than we are properly telling a story about him being good, but Brightburn’s attempts at genre subversion are far from incendiary. It can scratch a certain itch if you’re desperate for a new take on the slasher formula, but those complaining from “superhero fatigue” should stay away from this one.

People complain Superman is boring because he’s “too good”, but quite frankly he’s even more of a bore when he’s bad.