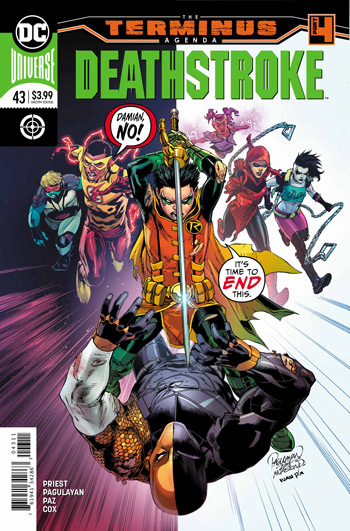 This issue concludes The Terminus Agenda saga. It’s a heck of an issue, too. The Titans have tried over the course of this crossover to imprison Deathstroke. But the whole thing has backfired and now all hell has broke loose.

The prison known as Mercy Hall has been put on lockdown. All of the super villains have left their cells. The Titans are in trouble.

In the opening scene, Deathstroke saves the Damian Wayne Robin from certain death. Damian replies angrily and tries to attack Deathstroke. It doesn’t go so well as you might imagine.

Priest starts off this final chapter with high stakes and doesn’t let up the tension throughout.

From there, the Titans have to get the prison under control. And they do. It gets a little bit confused and complicated at this point.

After that Deathstroke takes one final shot of turning Damian to be more like him. This scene is actually dramatic and even emotional.

The last two pages are the best part of the entire crossover. There is a confrontation between Robin and Slade. Slade basically tells Damian that Batman has ruined him. This leads to an incredible last few story moments that make the whole thing completely worth it. I’d even say that it is an instantly classic comic book moment that happens here. It’s cool.

The art is pretty great on this title as well. When the story gets muddled in the middle, the art does the same, but the last few pages make it all worth it. I don’t know where Priest is going to take it from here but I was not expecting that ending at all. And that’s a good thing.