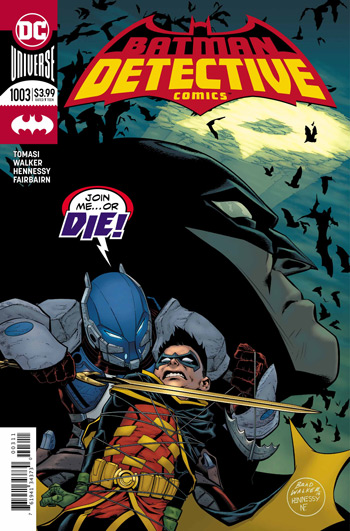 Peter J. Tomasi is over here on Detective Comics writing a tale that is equally as good as any of Tom King’s Batman tales.

He’s really been killing it on this title and the writing has been great! He’s brought the Arkham Knight into continuity and it’s been harrowing to say the least. I love what he’s doing here!

The issue starts off with Batman looking for Robin!

Robin has been kidnapped by the Arkham Knight and although Batman doesn’t know this, his gut is telling him that something is wrong. This is a great introduction to the issue.

After this opening, the book just does not let up.

We then pick up at Arkham Asylum where we were last issue with the Arkham Knight taking off their helmet. A surprise happens when we see who is underneath the helmet.

The surprise is that we have no idea just who the Arkham Knight is except that it’s a woman.

Leave it to Tomasi to turn the story in a direction I never would have guessed. Who is this woman? Why is she so angry at Batman? Just what is going on here? The questions keep on coming!

Robin fights the Knight’s minions and has a bloody battle with them. He seems to beat them and in doing so, he also seems to win over the favor of the Knight. She just lets him go. This seems simple enough. Then, you start to question it, wondering if this is part of some bigger plan.

Robin shoots a makeshift “Robin Signal” into the sky. Batman answers his call and Robin tells Batman about where he was. They then go back to the Batcave and draw a picture of the woman underneath the Arkham Knight’s helmet. It doesn’t ring any bells for Bruce and the mystery of who she is deepens.

Meanwhile the Knight is conducting some weird experiments with the residents of the Asylum. Just what the heck is she up to? Batman and Robin make their way down there. At the end we find out the Knight’s real name and it sets in motion a whole new set of questions.

Tomasi writes this issue masterfully. He is pacing his story perfectly and I’m poring over the details. The art by Brad Walker is stunning and wonderful. They are a fantastic team.

This is a book that only gets better and better. I can’t believe how good it has gotten and I can’t wait to see where this creative team takes us next.